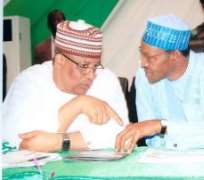 The question that hung in the air Sunday night was, what is former president Ibarahim Babangida up to coming up with two contradictory statements on the state of the nation especially in relation to leadership of President Muhammadu Buhari.

Some asked if the former head of state, nicknamed Maradonna because his suave political scheming during his regime as military leader, is up to one of his games.

First came a statement by Mr. Babangida's spokesperson. Kassim Afegbua, conveying the misgivings of his principal about President Muhammadu Buhari.

And in it, he did not mince words in demanding that the president step aside by 2019 to allow the younger generation decide the country's future.

Mr. Babangida, head of a military junta from 1985 to 1993, said Nigeria has reached a stage where it must dump “analogue” leaders for “digital” younger generation to make the country competitive in a fast-changing world.

But just a few hours later, another statement which was signed by Babangida himself, was released by PRNigeria, a pro-government public relations firm, which had little or none of the adversarial tone and outright rebuke of the incumbent administration, but skated around the issues of herdsmen killings and restructuring.

The later appeared to be a disowning of the first statement by Mr. Afegbua, indicating that he might not have approved the statement before it was sent out.

In the first statement, which was widely reported by online media and blogs, Babangida said Nigerians should not vote for Mr. Buhari, who he accused of mismanaging the lingering herdsmen crisis that has left hundreds dead this year alone.

He also backed calls for restructuring, especially devolution of powers, and slammed the ruling All Progressives Congress for being a disingenuous political party.

“While offering this advice, I speak as a stakeholder, former president, concerned Nigerian and a patriot who desires to see new paradigms in our shared commitment to get this country running,” Mr. Babangida said.

But the second statement which only a few paragraphs spoke about herdsmen attacks and the prevailing political atmosphere.

The second statement, released by PRNigeria, a pro-government public relations firm, portrayed Mr. Babangida as rebuking his spokesperson, Mr. Afegbua, for putting out words that didn't reflect his position.

“Let's me categorically state that as a former President and Statesman, I have unfettered access and channel of communication with the highest authorities in the country without necessarily going public with a sensational statement. Therefore, the views expressed in the alleged statement are not mine but that of the writer,” Mr. Babangida was quoted as saying by PRNigeria.

The agency said it had previously published uncontroverted statements from the former military ruler in the past.

The second statement was personally signed by Mr. Babangida himself.

The former president said a two-party political system is one of the crucial ways forward for Nigeria.

“I still believe in a two-party system as the best option for Nigeria,” Mr. Babangida said, according to the PRNigeria's version.

But Mr. Afegbua, appearing on Channels Television Sunday night, said the statement he signed reflected the views of Mr. Babangida, whom he said participated in the drafting process and fully endorsed the final version that was circulated on Sunday afternoon.

The long-time spokesperson of Mr. Babangida said some elements sympathetic to Mr. Buhari amongst the Babangidas were responsible for the statement.

The second statement released by PRNigeria on behalf of Mr. Babangida reads,

MY COUNSEL TO THE NATION –BY GENERAL IBRAHIM BADAMASI BABANGIDA, GCFR

My attention has been drawn to a press statement on the State of the nation with a particular reference to 2019 general elections and beyond.

Let's me categorically state that as a former President and Statesman, I have unfettered access and channel of communication with the highest authorities in the country without necessary going public with a sensational statement. Therefore, the views expressed in the alleged statement are not mine but that of the writer.

However, with due respect to individual opinion and constitutional rights, it is worrisome that Political events and civil unrest in many parts of the country have raised many questions on the governance and unity of our great nation. Indeed 2018 has been inundated with political clamours and hot debates over the corporate existence of this country. Many of contributions, including constructive criticisms and engagements, have shown greater concerns for the corporate existence of Nigeria beyond 2019 general elections.

It will be recalled that in my recent message on this year's Armed Forces Remembrance Day, I specifically expressed the dire need for proactive measures to stop farmers/herders clashes in the middle belt as well as Cattle rustling, armed robbery, Kidnapping, gangsterism and Cultism in other parts of the country.

Our security agencies have to step up surveillance with more efforts on intelligence gathering towards ensuring maximum security of life and property.

Recent happenings and utterances by political gladiators are alarming and not in the interest of common man that is already overstretched and apparently living from hand to mouth due to precarious economic conditions.

Despite all these challenges, I am optimistic that the political actors will play within the ambits of political norms and decorum to ameliorate the problems facing our society now.

I am a realist that believes in all issues in a democratic atmosphere are sincerely discussed and resolved in the spirit of give-and-take. Since after my military years that metamorphosed to being the only Military President in the history of Nigeria and my civilian life, I always have one clear objective that freedom can only be achieved through democracy.

Some people find this freedom as an avenue for eroding democracy by antics of hate speeches under the guise of religion, tribal or self-imposed mentorship. This trend of pitching political class and the people against one another is unhealthy and must be discouraged by all and sundry.

The clamour for re-alignment of governance in the country as we are approaching the 2019 election year is a welcome development only if the agitations are genuinely channelled through appropriate channels of law and order and the observance of the supremacy of the Constitution. Therefore, any attempt outside this circle of democratic tenants is deceptive and divisive idea capable of plunging our political journey into disarray.

As students of history, we are aware that many advanced democracies have two distinct ideological political parties, with a handful of smaller political groupings that serve as buffer whenever any of the known political parties derailed or became unpopular. I still believe in a two-party system as the best option for Nigeria.

It is high time that we engage in constructive dialogue on national issues in order to have a political solution to our myriad of problems. It is sad that Nigeria had its fair share of conflicts, and we cannot continue to fall back to those dark years of bloodshed.

As a people, now is the time to come together to address all Communal conflicts and criminality under any guise so as to unite the country in line with the vision of our founding fathers.nation, we can forge ahead in the task of building a more prosperous nation.