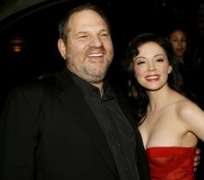 On the  Dr. Oz Show , Rose McGowan revealed that the now-iconic dress that she wore to the 1998 MTV Video Music Awards was a direct protest related to her claim that Harvey Weinstein raped her.

She said, referring to the MTV VMAs: “That was my first public appearance after being sexually assaulted. I was like, 'Is this what you want?'”

The dress, which was made from strings of beads, initially caused a stir for being so revealing. It has since become an iconic red carpet fashion moment.

McGowan continued, “I've never worn something like that before or since. That was a political statement that… of course, there was no Twitter at the time or Instagram, no way to speak for yourself.”