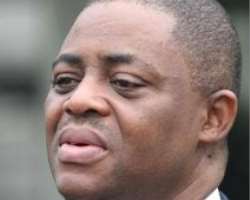 Justice Rilwan Aikawa of the Federal High Court sitting in Ikoyi, Lagos, on Wednesday, January 31, 2018, adjourned further hearing in a case involving a former Minister of Aviation, Femi Fani-Kayode and others to February 28, 2018.

Fani-Kayode is standing trial alongside a former Minister of State for Finance, Senator Nenadi Usman, Danjuma Yusuf and a company, Joint Trust Dimensions Limited, on a 17-count charge bordering on money laundering to the tune of N4.9billion.

At the resumed hearing today, counsel to Fani-Kayode, Norrison Quakers, SAN, told the court that his client was suffering from a heart- related ailment.

Quakers further stated that he was informed by Fani-Kayode's wife that her husband had been taken to hospital.

Fani-Kayode’s counsel assured the judge that he would obtain the medical report and make same available to the court before the close of work today or tomorrow, Thursday, February 1, 2018.

Consequently, Quakers sought an adjournment of the matter, which was granted by the judge.

However, the prosecution counsel, Rotimi Oyedepo, drew the attention of the court to Section 396, sub-section 4 of the Administration of Criminal Justice Act 2015, which states that “no party will be entitled to more than five adjournments in a particular criminal case.”

Oyedepo also urged the court to note that Fani-Kayode had taken two adjournments since the trial commenced.