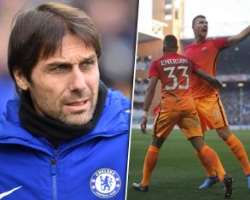 Chelsea have completed the signing of left-back Emerson Palmieri from Roma for a reported £20 million.

Emerson, 23, has signed a four-and-a-half-year contract at Stamford Bridge and becomes Chelsea’s second signing of the January window, following the £15m acquisition of Ross Barkley from Everton earlier this month.

Chelsea had been in negotiations with Roma over a potential €50m (£44m) combined deal for Emerson and striker Edin Dzeko, but after talks were reportedly held with the Bosnian’s agent Irfan Redzepagic in London on Monday, Antonio Conte confirmed that there would be no deal for the forward.

In an article announcing the deal on the club’s official website, Emerson, who will wear the No. 33 shirt, said: “I came here because it’s a great team with a great history. Today I am realising one of my dreams to pull on the shirt of such a great club.

“English football is something I have been watching since I was 15 years old. It is a really beautiful game over here but it is going to be even more beautiful to play it.”

.
Chelsea director Marina Granovskaia added: “We are delighted to welcome Emerson to the club. He is a young and talented player who strengthens the squad and will provide excellent competition for places as we pursue success in three different competitions.”

Emerson’s arrival provides squad cover at left wing-back for Marcos Alonso, allowing Kenedy to join Newcastle on loan for the rest of the season in search of regular Premier League minutes. It also ends Chelsea’s immediate interest in Juventus wing-back Alex Sandro, a priority target in the summer.

Capped at under-17 level by Brazil but declared for Italy at senior level, Emerson joined Roma on loan from Santos in August 2015 and was signed on a permanent basis for €2m around 18 months later.

He has made just one Serie A appearance this season, having torn his anterior cruciate ligament on the final day of the last campaign.