Saraki Remembers Ekwueme, Describes Him As ‘A Man of Courage’ 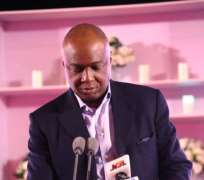 The President of the Senate, Dr. Abubakar Bukola Saraki, has described late Vice-President, Dr. Alex Ekwueme, as a man of courage who always put Nigeria first.

In a post on his Facebook page, which highlighted his comments delivered at the Night of Tribute and Songs organized in honour of the late statesman, Saraki remembered his first encounters with Dr. Ekwueme during his teenage years.

“Tonight, it was a great honour to speak at the Night of Tribute and Songs to celebrate the life and achievements of the late former Vice-President, Dr. Alex Ekwueme (GCON). This is because, my first encounters with Dr. Ekwueme were during my teenage years — when I used to run around the house — as he was very close to my late father, Dr. Abubakar Olusola Saraki.

“Both men formed the now defunct National Party of Nigeria (NPN) during the Second Republic, and they used to go for what they called “Monday Meetings”, which were between the President, the Vice-President, the Chairman of the ruling party, and the leadership of the National Assembly.

“After these meetings, my father used to come back and tell me of how highly cerebral Dr. Ekwueme was in the administration and he admired his contributions. When my father said this, I always told him “You should not be surprised, after all he went to Kings College — what do you expect?” (I always had this running banter with my father because he went to Eko Boys High School and I went to Kings College. We used to joke about this).

“Growing up, I really admired Dr. Ekwueme’s ability and professional capacity. He was a professional architect — and I remember that when I was studying, one of the things that I found most difficult was drawing. I have always admired people who study architecture because they carry around those ‘long sticks’ and other such equipment, line them up, and produce these magnificent designs. For us as medical doctors, that was one of the most difficult things to do.

“Most importantly, tonight, we heard and made a lot of speeches about Dr. Ekwueme, however, one thing that we must all remember and learn from was his courage and his ability to believe in something and drive for it. His fight in bringing back our democracy with the G-34 — is one major contribution of the late Vice-President that we should never forget.

“As we remember Dr. Ekwueme, we must also remember his stance on ‘Nigeria First.’ He did not see himself as his language, religion, or tribe. In this regard, if there is one thing that we should take out of the life of Dr. Ekwueme is to first see ourselves as Nigerians if we want this nation to unite and move forward. This is the one tribute that we should all make to the legacy of Dr. Ekwueme, and if we continue in this direction, the future will be great for this country. Until we do this, we will continue to make many speeches and we will not have paid the highest tribute to this great man.

“Therefore, on behalf of the National Assembly, my family, and all those who had the opportunity to have encounters with Dr. Ekwueme, may his gentle soul rest in perfect peace.

“To the Ekwueme family, this should be seen as a time of celebration, and I pray and hope that amongst you are also great leaders of tomorrow.”