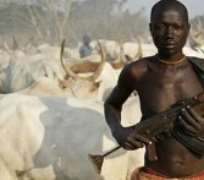 The Vice-President Yemi Osinbajo-led committee set up by the National Economic Council to find lasting solutions to killings by herdsmen across the country has recommended increased military presence in Benue and other states affected by the attacks.

The committee, which has nine state governors as members, was formed at the council's meeting of January 18, 2018.

The governors on the committee are those of Kaduna, Zamfara, Taraba, Benue, Adamawa, Edo, Plateau, Oyo and Ebonyi states.

A top government official who is conversant with the work of the committee told journalists on condition of anonymity on Sunday that decisive military force would be deployed to end the attacks.

The source also said the government believed that bandits and mercenaries, and not herdsmen, were responsible for the killings.

He said, “Decisive military force will now be fully engaged to deal with the bandits believed to be behind the killings in parts of the country, especially regarding the crisis often associated with herdsmen.

“The settled view in official circles is that the reported killings and violence recorded are the work of bandits and mercenaries since in many cases the herdsmen are often well-known in the communities where their cattle normally graze.”

The source disclosed that the committee started its work with a meeting presided over by Osinbajo immediately after the last meeting of the council held inside the Council Chamber of the Presidential Villa, Abuja.

“At the end of the meeting last week, it was clear that a decision had been taken in the management of the crisis by engaging the military in a more decisive manner,” he added.

The government official added that another major outcome of the committee's meeting was the need to locate and identify the bandits who perpetrated the killings and violence.

He said the committee had also resolved to urge the Federal Government to strengthen law enforcement and security and intelligence agencies in the country so they could coordinate better in dealing with and preventing the crisis from escalating.

The source said the committee also took a position that every state should design its own solutions on how to permanently address herdsmen and farmers' clashes.

“The Federal Government will not impose any solution on any state. The fears being expressed on cattle colonies are misplaced,” he said.

The official added that the military men would soon begin to take decisive military steps to tackle the situation.

The Senior Special Assistant to the Vice-President on Media and Publicity, Mr. Laolu Akande, could not be reached on the telephone for comment as of the time of filing this report on Sunday.

The Deputy President of the Senate, Ike Ekweremadu, has said the best way to end the crisis between herdsmen and farmers is to dump open grazing for ranching.

He urged the states to make laws to end open grazing, describing it as “archaic, anachronistic and out of tune with modern society.”

Ekweremadu stated this at the House of Commons, Parliament of the United Kingdom, where he delivered a lecture titled, 'African Politics: The Dynamics and Lessons.'

A statement on Sunday by his Special Adviser on Media, Uche Anichukwu, quoted Ekweremadu as stating that the Federal Government's only business in ranching would be the provision of policy direction.

The Deputy Senate President said, “I believe that ranching is the way to go rather than open grazing. However, it is for the Federal Government to provide the policy direction, while the states take up the challenge, because the issue of cattle rearing is a state matter as all lands are vested in the respective states under the Land Use Act in Nigeria.

“The states need to come up with legislation to end open grazing. It is not for them to set up ranches since it is people's private business. The states should instead come up with agricultural credit schemes that will encourage and support the farmers to set up their ranches.”

Ekweremadu also reiterated his call for the decentralisation of policing in Nigeria and Africa, saying such was the continent's way out of its myriad of security challenges.

He blamed the worsening insecurity in Nigeria on unitary policing in the federal system.

He said, “The senseless killings in Benue, Taraba, Plateau, Kaduna, Adamawa, Nasarawa and Zamfara states in Nigeria; the insurgency in the North-East Nigeria, and the militancy in the South-South of the country thrive because of the abnormal, centralised system of policing in Nigeria.

“Africa must enthrone modern policing that is swift, active and reliable. This will not only secure lives and property, but also will secure the confidence of investors and our nascent democracies.

“Nigeria must come to terms with the need to allow sub-national governments to set up their internal security organisations. This way, states and local governments will determine the number of policemen they need in line with their peculiar security challenges and realities.”

Two killed in Taraba attack
Gunmen suspected to be Fulani militia on Sunday killed one person in Ibua village of the Ibi Local Government Area, just hours after the same group allegedly killed a Tiv man in the neighbouring Wukari LGA.

The chairman of the Wukari council, Daniel Adi, who confirmed the killing of the Tiv man in his local government area on Sunday, said the attack took place on Saturday.

In the neighbouring Ibi LGA, Chairman of Tiv socio-cultural group, The Tiv Cultural and Social Association, Mr. Orhembaga Mkavga, told our correspondent on the telephone that the attackers stormed the village at about 4.45pm.

Mkavga said, “One person was killed; a woman was injured with several houses destroyed in the attack.”

Chairman of the council, Bala Bako, could not be reached on the telephone, but the state Police Public Relations Officer,  David Misal, told our correspondent that he was yet to be briefed.

In a related development, Adi and his counterpart in the Takum LGA, Shiban Tikari, on Sunday escaped death in two separate attacks in the state.

Adi told our one of our correspondents on the telephone on Sunday that he came under attack from suspected Fulani herdsmen around Gidin Dorowa, a town in the Wukari LGA.

According to him, when he got the news that suspected Fulani herdsmen killed the Tiv man, he mobilised his security team to the area.

“On sighting me and the security team which was made up of the police and the men of the Nigeria Security and Civil Defence Corps, the Fulani men opened fire, but the security men responded with their own fire power and the Fulani took to their heels.

“We chased them and apprehended three Fulani men who confessed that they were called as reinforcement by the Fulani militia that attacked us.

“Those arrested have already been taken to the state police command in Jalingo for further investigation,” he said.

Also, some gunmen on Sunday whisked away the driver of the council chairman of the Takum LGA, who was later released.

Mr. Emmanuel Bello, the Senior Special Assistant on Public Affairs to Governor Darius Ishaku, told one of our correspondents that the attack happened when the council chairman was going to Donga for a thanksgiving service.

Bello, who said Tikari was in another car with his Donga LGA counterpart when the incident occurred on Takum-Chanchanji-Wukari Road, called for the reinforcement of the Joint Benue/Taraba military task force to check insecurity in the area.

The Taraba State Police Command's spokesman, ASP David Misal, who confirmed the incident, said it was a robbery attack and that the council chairman was not personally involved.

On the attack in Wukari, the police image maker said he had yet to be briefed.

A retired Archbishop of Methodist Church Nigeria, Ayo Ladigbolu, has described the proposed creation of cattle colonies for Fulani herdsmen as an attempt to seize land in other parts of the country for cattle rearers.

Ladigbolu, who is also the vice chairman of the Yoruba Unity Forum, advised governors in the South-West to resist the attempt.

Speaking in an interview with one of our correspondents in Osogbo on Sunday on the sidelines of the 10th anniversary of the Methodist Church Nigeria, Diocese of Osogbo, the retired archbishop said, “We cannot be re-colonised. Whether you are setting up pig colonies, chicken colonies or cattle colonies, Yorubaland should not be re-colonised.”

The cleric, who was given an award of 'Pillar of Faith' by the diocese for his contribution to its creation, also said since the government had refused to stop the herdsmen from killing, maiming and destruction of property, Yoruba people and other Nigerians should defend themselves.

The Bishop of the Diocese of Osogbo, Rt. Rev'd.  Amos Ogunrinde, also said the destruction of farms by herders could put Nigeria at a risk of starvation.

Kogi youths move against cattle colonies
A non-partisan interest group, Kogi Youths Round-Table (KYRT), on Sunday warned Governor Yahaya Bello of Kogi State not to cede any part of the state land to the Federal Government for  the establishment of cattle colony.

The group in a statement by its National Publicity Secretary, Ajogwu Jerry, called on stakeholders, civil societies and relevant legal advisory bodies to work with Bello to find better ways of addressing the incessant herdsmen attacks.

The statement read in part, “Kogi State is not a cattle republic and the idea of the state governor to set up cattle colonies is unacceptable.

“In as much as we can permit the entrance and exit of Fulani herdsmen who are always on transit within the state, we are not in support of Yahaya Bello's politically-motivated colony orchestrated to win the favour of his parochial supporters and godfathers.”

The group noted that Kogi should not be used as an experiment for a scheme at the detriment of the masses.

It called on Bello to discard the cattle colony idea, saying it was anti-people.

Bello is among the 16 state governors who agreed to make land available for the proposed establishment of cattle colonies.

We will mobilise Christians
– Archbishop Kawas
THE General Overseer of World Harvest Ministries International and Nigeria Coordinator, International Communion of Charismatic Evangelical and Apostles (ICCEBA), Archbishop Leonard Kawas, has thrown his weight behind the implementation of the anti-open grazing law in Benue State.

Kawas stated that the law and the ranching policy by Governor Samuel Ortom were the panacea to ending herdsmen and farmers clashes in Nigeria.

Kawas stated this when he led a delegation of the ICCEBA on Friday to commiserate with the governor over the killing of 73 people on New Year's Day by suspected Fulani herdsmen.

The Archbishop promised to mobilise other Christians in Nigeria behind Ortom to the killings.

''The governor's stance is novel and priceless. We are 100 per cent behind you and have taken it upon ourselves to mobilise the entire church in Nigeria and all over the World to stand with you.”

Ortom commended the Archbishop and his team for standing by the Benue people, saying no amount of intimidation and harassment would make him to change his mind against the law that was legally processed.