Herdsmen: What has happened to the Great Green Wall? 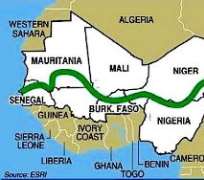 Journalists and everyone concerned with the matter should shout out to the Minister of Environment. What has happened to the Nigerian implementation of the Great Green Wall?

Where is the current Minister of State for Environment Ibrahim Jibrin? What did the N10b Nigeria approved for the implementation of the project in 2014 fetch us? How much more money is going into the project?

The National Agency for the Great Green Wall Project (NAGGW) should be contributing to the conversation on desertification and the herdsmen challenge. Mr Goni Ahmed is Director General and reports to the Minister of Environment. How far so far?

The matter of the herdsmen and their daredevilry has gripped the national consciousness for the last two years at least. As the herdsmen stomp on farmlands with impunity, the Federal Government has an incoherent narrative. One day they claim the herdsmen are foreigners. The next, President Buhari and his minister of defence ask the grieving people of Benue to accommodate the herdsmen as fellow citizens of Nigeria.

The government has come up with a purported solution in the creation of cattle colonies. If the cattle colonies are not a means for a land grab across the vast Nigerian nation and is a response to ecology, you would expect Government to commence with existing initiatives and spaces.

Nigeria has recovered the expansive Sambisa Forest. Sambisa hosted a Game Reserve in the past covering from 686sq km to 2258sqkm. Wikipedia states that It occupies parts of the states of Borno, Yobe, Gombe, Bauchi along the corridor Darazo, Jigawa, and some parts of Kano state farther north. It is administered by the Local government areas of Askira/Uba in the south, by Damboa in the southwest, and by Konduga and Jere in the west."

That the Borno State Government ran a game reserve in Sambisa Forest in the past means they can still do so today.

Then I draw attention, once again, to the Great Green Wall project aimed at tackling the ecological challenge. The Great Green Wall initiative is a pan-African proposal to “green” the continent from west to east to battle desertification. It aims at tackling poverty and the degradation of soils in the Sahel-Saharan region, focusing on a strip of land of 15 km (9 mi) wide and 7,100 km (4,400 mi) long from Dakar to Djibouti.

The Global Environment Facility notes, “Populations in Sahelian Africa are among the poorest and most vulnerable to climatic variability and land degradation. They depend heavily on healthy ecosystems for rainfed agriculture, fisheries, and livestock management to sustain their livelihoods. Unfortunately, increasing population pressures on food, fodder, and fuelwood in a vulnerable environment have deteriorating impacts on natural resources, notably vegetation cover. Climate variability along with frequent droughts and poorly managed land and water resources have caused rivers and lakes to dry up and contribute to increased soil erosion.”

There is a tidy sum of about US$81m involved in this project. One writer, Dylan Thuras, notes that more money is available. He states, “.. International organisations have pledged over $3 billion toward the completion of this massive environmental project, designed to help stop land degradation.”

Member countries choose their priorities and get funding from the Global Environment Facility. That body reports that Niger has made the most progress. “Progress is apparent especially in the Zinder region of Niger, where tree density has significantly improved since the mid-1980s. GEF CEO Monique Barbut attributes the success to working with farmers to find technical solutions, particularly long-term land and financial solutions, to save the trees.”

Nigeria commenced implementation in 2013 and in 2014 set up the Interim Office of the National Agency for the Great Green Wall with the appointment of an Acting Director General. Nigeria’s GGW programme involves 11 states. Benefitting states are Adamawa, Bauchi, Borno, Gombe, Jigawa, Kano, Katsina, Kebbi, Sokoto, Yobe and Zamfara. It involves the establishment of a greenbelt covering 1500km from DandiArewa Local Government Area of Kebbi State to Marte in Borno State.

The National Agency for the Great Green Wall says "The mission of the NAGGW is to halt and reverse land degradation, prevent depletion of biological diversity, ensure that by 2025, ecosystems are resilient to climate change and continue to provide essential services that would contribute to human welfare and poverty eradication."

How are the Governors of the North driving implementation of this bold attempt to solve the ecological challenge? Why are other countries doing better than Nigeria in the drive?

What other measures are the Governors of the North and the Federal Executive Council taking to tackle the challenge other than seeking to confiscate land from other areas?

Nations of the world are tackling the challenges of climate change by looking inwards as well as deploying science and technology.

Nwakanma, a communication and marketing consultant, is on the Adjunct Faculty, School of Media and Communication, Pan Atlantic University, Lagos