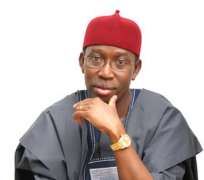 The Delta State Government has reiterated its commitment to support the success of the two-phased measles campaigned slated for March 1st and 13th 2018 in the state.

The state Commissioner for Health, Dr. Nicholas Azinge made this known recently when officials of the Delta State Primary Health Care Development Agency (DSPHCDA) led by its Chairman, Dr. (Mrs.) Isioma Okobah paid him an advocacy visit in his office.

Dr. Azinge said the governor Ifeanyi Okowa, has provided an enabling environment for policies and programmes which impact directly and positively on the lives of residents to be actualized.

The Commissioner said that due to the Governor's commitment to the health and wellbeing of Deltans, he would personally be at the flag-off of this year's Measles Campaign.

Dr. Azinge also expressed appreciation to the support so far given by the World Health Organization (WHO), United Nations Children Fund (UNICEF) and the National Primary Health Care Development Agency (NPHCDA) who are donor partners in the fight against killer childhood diseases in the State.

While reassuring the partners of government support, he called for frequent interactive sessions among the Delta State Primary Health Care Development Agency (DSPHCDA) and the Ministry, to harmonize strategies and coordinate resources towards achieving common goals.

Speaking earlier, the Executive Director of the Delta State Primary Health Care Development Agency (DSPHCDA), Dr. Jude Winful-Orieke said measles is endemic in this part of the world, hence the need to collaborate with the relevant partners to achieve 95 per cent success in reaching children aged between 9 to 59 months.

Dr. Winful-Orieke said this crucial stage which brought them on an advocacy visit to the office of the Commissioner for Health also entails sensitization at the state and local government levels as well as training of health workers, adding that plans must be solidified so that implementation which kicks off 1st March, will be easier, thereby achieving high coverage.

In her address, the Chairman, Delta State Primary Health Care Development Agency (DSPHCDA), Dr. Isioma Okobah explained that measles vaccination campaign is a national health intervention programme conducted every three years in line with the Agency's vision to have an effective and efficient Primary Health Care system in Delta State which is accessible to all people based on the principle of equity, fairness and social justice of universal health for all.

Dr. Isioma Okobah appealed to the Commissioner to intervene in the area of provision of commodities, supervisory and logistics support as well as administrative for the processing of financial approvals for the campaign.

Also in attendance were some Directors in the State Ministry of Health.