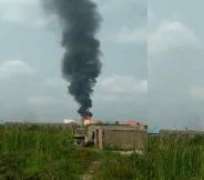 Residents of Ijegun in Navy Town, Ojo area of Lagos State are currently scampering for safety following a fire outbreak in the area.

Eyewitness reporters told Channels Television that a loud noise was heard at about midday after a diesel tanker carrying 33,000 fuel fell.

Some residents are raising concern over the citing of tank farms near the Navy Town Ojo armament depot a distance which according to him is about five nautical miles.

The residents are calling on fire service and other emergency agencies to attend to the situation before it gets worse.