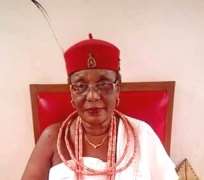 For smooth running of palaces headed by female monarchs in the nine local government areas of Delta North Senatorial District, Delta State, the Omu Okpanam/Omu Anioma, HRM Obi Martha Dunkwu, has called on the newly sworn-in nine Local Governments Chairmen to come up with modalities through which the Omus in Anioma land could be paid on monthly basis, pointing out that given their functions in the various communities, they deserve to be paid some form of stipends.

She made this call during an Inaugural meeting called at the instance of the various Omus in Anioma, convened at her palace in Okpanam on Thursday 18th January, 2018.

“So you cannot ask the FG to pay you or the State to pay you; it is only the Local Government where you come from that can pay.

In my vision for the Ndi Omu, I had over the past 18 years during the Administration of Chief James Ibori, made effort towards the welfare of the Omu holders, but it was not possible because just a few Local Governments in Delta have this institution”.

Omu Dunkwu further affirmed that Ibori helped by issuance of certificates to the Omus and giving them respect as Royal Mothers; however counseled that Royal Mothers approach local governments in Anioma for their welfare.

“However, State Government officials counseled that Royal Mothers approach local governments in Anioma for their welfare”, she stated.

Omu Anioma however, appealed to the Council leaderships in Aniocha North, Aniocha South, Oshimili North, Oshimili South, Ika North-East and Ika South to see the welfare of Ndi Omu as a legacy achievement of their administrations; maintaining that the traditional functions of the Omu is tasking.

“The Omu is the leader of the women, she is the custodian of the market for the community, and she is the spiritual guide to the Traditional Ruler and to the community”.

If confirmed to become an Omu, the holder returns to reign in her father's house and automatically bestowed a male right; depriving her of every normal activity.

However, in most cases, communities are unable to build houses for them and palaces, take care of them in terms of feeding and health care provision.

“The Omu institution was almost going into extinction in Anioma for want of preservation, until some of us came on board and started spending our personal money to promote it for the preservation of our culture”, she said.

Speaking further, Omu Dunkwu stated that “for the fact that the Local Government Chairmen came from the communities that have Omu and seeing the functions they perform to keep the communities together, they need to assist in surviving this institution by taking care of its occupants. If you don't pay them, who will?”, she asked.

Moreover, the Omu Anioma in conjunction with other Omus, including HRH Omu Dr. Anwuli Gold, Omu of Igbodo; HRH Omu Grace Osibe, Omu of Akwukwu-Igbo; HRH Omu Theresa Uwadia, Omu of Onicha-Ukwu; HRH Omu Felicia Okolie, Omu of Ubulu-Okiti; HRH Omu Clara Rafua, Omu of Ogwashi-Uku represented by Aka-Omu Edith Rafua; HRH Omu Justina Ntoka, Omu of Onicha-Olona, represented by Iyase Omu Kate Dunkwu and of course HRH Omu Dr. Ada Biosah, Omu of Asaba who was around but had to leave to attend to emergency at the market, wished all Anioma sons and daughters at home and in the diaspora a Happy New Year.

They also prayed for the land of Anioma and her illustrious citizens in leadership positions, especially the Delta State Governor, Senator Dr. Ifeanyi Arthur Okowa.

But in his reaction, chairman, Aniocha North local government area, Chuks Oseme said, the call is a welcomed development but noted that the advocacy should be made constitutional.

“Because the constitution only makes provision for traditional rulers of each community. In the fourth schedule of the 1999 Constitution, I think that 5% was made available for the monarchs but for the Omuship, the Constitution did not capture the Omus and for them to come out and start advocating, they have to do the needful”.

Oseme, who spoke through his Special Assistant on Media and Publicity, Nwanazia Matthew, stressed that until the National Assembly (NASS) and the Delta State House of Assembly enshrine their roles in the constitution, the call would amount to nothing, revealing that Omus are given some kinds of benefits in the market following those that beaches law down laws.

According to him, the call would mean more financial burden to the chairman, adding that even the payment been made to traditional rulers as spelt out in the 1999 Constitution is becoming difficult as some of the councils are unable to pay the monarchs some months, “as it is now, it is difficult for most of the local governments to offset even the constitutional provision of the monarchs and now bringing another burden to them, you know what it means”.