The Saudi applause and prospects for 2018 Hajj 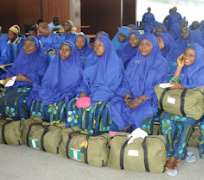 Nigeria was ranked very high by the Saudi government for 2017 Hajj. And it is the truth that Hajj operations in Nigeria have definitely stabilized. Since the birth of the National Hajj Commission of Nigeria (NAHCON) 11 years ago, the stories of success from year to year have been steady and expanding. Hajj stakeholders in Saudi Arabia, around the world and Nigeria have been lauding the performance of Nigeria. This is simply because the commission has ensured fast, timely and hitch-free journeys of the Nigerian pilgrims to the Kingdom of Saudi Arabia and back to their motherland.

The 2017 Hajj with all its challenges was generally a success story. That is why the public hearing conducted by the Senate on the exercise was full of acclamation for the commission. This depicted the true essence of the Hajj body because at the end of the presentations by the chairman/CEO of the commission, Barr. Abdullahi Mukhtar Abdullahi on the 2017 Hajj, the Senate and all other stakeholders had no option than to go into ovation for the excellent job the commission did. However, no one can give a sincere appraisal of an event other than the organizers. And for Hajj, Saudi Arabia remains the host and the overall organizer. It has become recurring news that the Kingdom over the years commends Nigeria and grants her awards for excellent performance in all ramifications of Hajj management.

For 2017 Hajj, Minister of Hajj and Umrah, Dr. Muhammad Bin Taher-Benten lauded the NAHCON for the wonderful outing of Nigerian pilgrims. The Saudi minister also listed NAHCON among the most organized and law abiding Hajj missions of the world during the 2017 Hajj operations. It did not end there, Hajj managers in Nigeria are very happy with the initiatives put in place by NAHCON every year. There can hardly be success without planning and execution of the plans. NAHCON ensures early preparations and timely execution of programmes. That is why both the federal government and Nigerian Muslims have been pleased with its performances.

On 2017 Hajj, top government officials could not hide their appreciation over the success achieved by the commission despite some hitches in terms of the inadequate bed spaces for pilgrims in Mina and Arafah. That was a global matter and was not under NAHCON’s control. It was basically due to the return of the earlier 20% Hajj quota allocations to nations by the Saudi government which was reduced in 2012 because of the expansion projects on the two Holy Mosques of Makkah and Madinah. It must remain in our memory that Mina has space to accommodate about 900,000 pilgrims only while nearly three million Muslims converged for the 2017 Hajj. And many countries, including Nigeria would demand for more Hajj slots if not for the economic situations.

The supervisory government organs, under which NAHCON operates, were elated with the achievements of 2017 Hajj. The Chairman, Senate Committee on Foreign Affairs, Sen. Monsurat Somunu, particularly described the chairman of the commission as a man of humility, action and vision. She said that although there were rooms for improvement, the 2017 Hajj is adjudged very successful as all the unforeseen challenges during the previous Hajj exercise were properly tackled by the commission. The Chairman, House committee on Nigeria-Saudi Inter-parliamentary Friendship and Hajj Affairs, Hon. Dr. Abdullahi Balarabe Salame, lauded NAHCON’s improvements in the accommodation and feeding arrangements for the pilgrims and sought for enhanced cooperation between the commission and the state boards. The leadership of the air carriers for 2017 Hajj, Hon. Minister of state for Foreign, Affairs, Hajiya Khadija Bukar Abba, through, Amb. Haliru Shuaibu Sodangi, the Nigerian diplomatic corps in Saudi Arabia as well as the leaderships of state boards and tour operators expressed happiness with the outing.

With that, preparations for 2018 Hajj began immediately the 2017 Hajj ended. One of the most critical concerns to the Nigerian pilgrims for Hajj is accommodation. In recent years, NAHCON has constantly secured the best hotels situated in proximity of the two Holy Mosques in Madinah, an initiative that has saved the Nigerian pilgrims many hurdles they used to face before in terms of long distance to the Mosque, loss of directs to and from the Mosque, accidents on the roads, exposure to hazards from unlicensed food vendours as well as security related incidents, amongst others.

Before returning from 2017 Hajj, NAHCON set up a high-powered team made up of members selected from the Nigerian diplomatic mission in Saudi Arabia, NAHCON board and state chief executive officers which met with the accommodation providers in Madinah. The providers were delighted with Nigeria for the early arrangement for 2018 Hajj accommodation, being the first time such very early action is taken. They have promised to ensure that they reserve, amidst competition from other countries, the best accommodation for Nigeria in the Holy City.

As a regulatory agency, the commission is empowered by its establishment Act to ensure ease for the pilgrims and the entire operations. Thus, it has mapped out strategy for a unified accommodation system in Makkah which used to be under the arrangement of state boards. If this is implemented, it will be another milestone in the interest of Hajj management in Nigeria. Although there have been mixed reactions on this move over the years, NAHCON often had to deal complaints over irregularities associated with the acquisition and management of accommodations in Makkah which was being handled by state boards. Most of the problems could not be solved despite the rules and regulations laid down by the commission for that.

Some of the state boards insist that the acquisition of Makkah accommodation should remain under the states. However, it must be asserted that the Saudi government and Hajj authorities do not deal with each state in isolation but Nigeria as a single entity at par with other countries of the world. All the states are witnesses that the accommodation arrangements in Madinah have been a success. The Makkah issue should not be different because the target is to ensure easy stay for the pilgrims while in the Kingdom. They should allow this experimentation to proceed in 2018 Hajj especially since NAHCON has already planned extensively in that aspect.

The two major challenges encountered by Nigeria and Saudi Arabia respectively in the 2017 Hajj must be subdued this year. Nigeria has to overcome the challenge of late registration by its pilgrims which caused late payments to service providers. This can be achieved by early announcement of Hajj fares. Saudi Arabia, on her part, has to overcome the challenge of accommodation in Mina, Muzdalifah and Arafat. The land at Muzdalifah should be made more habitable while the traduddiyyah system within Muzdalifah should be more coordinated.