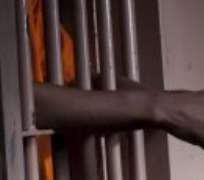 A 35-year-old man, Seun Ogunmodede, is to cool his heels in prison for the next three years for assaulting and attempting to rape a woman,Adenike Olayinka, while going to the farm, an Ile- Ife Magistrates' Court in Osun ruled on Friday.

The randy Ogunmodede had ambushed Olayinka, grabbed and attempted to rape her while going to farm.

Magistrate Olalekan Ijiyode, who handed down the verdict, said the court had no option than to sentence Ogunmodede since he pleaded guilty to the two-count charge of criminal assault and attempted rape.

“The accused is sentenced to three years in prison without an option of fine.”

Osanyintuyi said the accused assaulted the complainant, Adenike Olayinka, and injured her finger with a cutlass in an attempt to overpower and rape her.

According to him, the complainant was going to her farm when Ogunmodede grabbed her from the back and attempted to rape her.

“The complainant struggled with the accused and in the process, she was injured.”

“The accused took away her bag containing a Holy Bible, N1, 500, a mobile phone and a scarf,” Osanyintuyi said.