Donald Trump says a baby born in the ninth month “is wrong” and “has to change” because . . . who knows? We give up 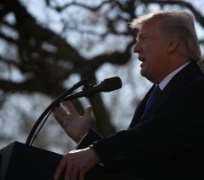 Ready to truly shake your head?
President Donald Trump, while speaking at the 45th annual March For Life on Friday, made a remark that required a double take. In a video taping of the event, Trump clearly states the following:

“Right now, in a number of states, the laws allow a baby to be born from his or her mother’s womb in the ninth month. It is wrong. It has to change.”

Come again?
Actually, maybe it’s better if you hear it for yourself:

We know the president and the American people don’t see eye to eye on a lot of things, but we really thought full-term pregnancies were something we all agreed were a good thing.

The Twitterverse was quick to rationalize that Trump wasn’t, in fact, condemning the evolutionarily sound 40-week gestation period. Most believe he meant to say “torn from his or her mother’s womb,” in reference to third-trimester abortions.

Even still, such a reference seems out of turn considering that  fewer than two percent of US abortions occur after the second trimester . Abortions anytime during the third trimester, never mind in the final month, are extremely rare and are often only done when there’s a risk of a severe, fatal birth defect. Thus, it’s frankly incendiary to discuss it as if it’s a systemic problem that needs correcting.

So, because we don’t know what’s worse — the mistaken word or the original intent — we’re going to shake our heads once more and move on to what’s next