Scott Disick was shocked to hear Younes Bendjima was my 'boyfriend': Kourtney Kardashian 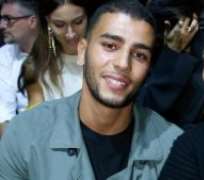 Kourtney Kardashian had to break it to Scott Disick that she’s in a serious relationship.

In a preview clip for Sunday’s Keeping Up With the Kardashians, the mother of three reveals to her sister, Khloe Kardashian, that  her ex-boyfriend  called her in the middle of the night to talk about their dating lives. Kourtney is currently seeing  24-year-old model Younes Bendjima , while Scott is in a relationship with  19-year-old model Sofia Richie.

This is when the 38-year-old reality star decided to come clean about her relationship with Younes. “By the end of the conversation, I was just like, ‘I have a boyfriend and he’s 24 years old! It’s not the craziest thing that’s ever happened in the world!'”

According to Kourtney, Scott wasn’t pleased with this response. “Then he was like, ‘He’s your boyfriend!’ Then he hung up the phone.”

Kourtney says she didn’t call him back but instead “just went to bed.”

“Cut the cord,” Khloe responds to her sister’s story.

Back when news broke over the summer of Kourtney’s new romance,  a source told ET  that Scott, 34, was having a hard time seeing his ex-girlfriend  with another man.

“It's never an easy thing to watch someone you share three children with, and so many memories, move on with someone else,” the source said, adding that Scott really doesn’t know Younes. “Scott has had a hard time watching Kourtney move on while he is in the same place he's been in for years. It's been tough for him.