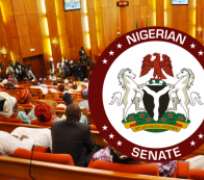 The Senate on Monday, issued a 14 day ultimatum to the Inspector-General of Police (IGP), Mr. Ibrahim Idris, within which to investigate the mass killings in Benue State and arrest the masterminds.

Also it called on the Attorney-General of Benue State, to immediately prosecute those expected to be arrested by the IGP.

The atmosphere in the House of Representatives was that of anger and lamentation over the killings, as majority of the lawmakers berated President Muhammadu Buhari and the security agencies for failing in their duties to ensure security of lives and property in the country. The Senate sternly warned Idris not to flout its decision, vowing it would ensure that the decision was carried out.

It mandated its leadership to meet with Buhari and ensure that the recommendations were fully implemented without any delay.

A Senate ad-hoc committee on Review of National Security Infrastructure, last weekend, visited affected communities in Benue. It also met with Governor Samuel Ortom, traditional rulers and other stakeholders in the state.

Senate President Bukola Saraki insisted: “The President must act. Those responsible must be held accountable. Military all the time cannot be the solution.

“Action must begin to happen to show to Nigerians that we are not just talking. We need to ensure that this never happens again. We need to restore hope.”

His deputy, Ike Ekweremadu, who warned of a looming war also called on Buhari to declare a nationwide state of emergency. He contended that with the declaration, the Federal Government would have the leeway to deploy troops to every part of the country, close borders and take drastic actions to tackle the menace.

In his words: “The international and the intelligence community are worried that war is coming to Nigeria. We must not allow this to happen. The constitution says that the primary responsibility of government is the protection of lives and properties. Everyday, we come here to condemn the killings and observe a minute silence.

“It is important for us to have a rethink of creating a state police. Every state should have the kind of police that fits into their system. Nigeria is the only democracy that still has a central police. The states that can provide for it financially should be allowed to do so.”

Former Senate President, David Mark, blamed the problem on failure of intelligence. He said the Federal Government was not proactive in responding to national crises.

He warned that if this issue was not tackled, Nigerians might resort to self-help and take up arms against the state.

Senate Minority Leader, Godswill Akpabio, wondered why security agencies gave preferences to some parts of the country more than others.

He said as long as governors did not control security apparatuses in their various states, insecurity would persist in the country.

Committee chairman on Ethics, Privileges and Public Petitions, Samuel Anyanwu, called on the Federal Government to proscribe herdsmen and tag them as terrorists.

He warned that the government must not play politics with the issue. He said if the Indigenous People of Biafra (IPOB) could be proscribed as a terrorist organisation, despite the fact that they did not carry arms, herdsmen must also be given the same treatment.

Former governor of Kebbi State, Adamu Aliero, called on the Senate to reconsider a bill sponsored by Rabiu Kwankawso on grazing, saying its passage would solve the frequent clashes.

And in the House of Representatives, there was anger as members had a heated debate on a consolidated motion by Gabriel Kolawole and Dickson Takighi on “need for the Federal Government to declare a state of emergency on security in the country over spate of deadly attacks in the country by suspected herdsmen.”

The House resolved to set up a committee to meet with heads of security agencies in the country to ascertain measures put in place to forestall future attacks.

Wale Raji said the police and other security agencies saddled with the task of providing security in the affected areas failed the people.

Afe Olowokere said Buhari did not help matters in the case of killings arising from the attacks from suspected herdsmen.

Sadiq Ibrahim said the herdsmen needed the protection of every Nigerian, noting that the herdsmen lacked the basic comfort others took for granted.

Hassan Saleh said the Federal Goverment failed the people of Benue, “what we are seeing is a big failure. We were with the President yesterday and our take home was nothing.”

Mark Gbillah said: “This administration has failed the Benue people. There is no more respect for the sanctity of human life. That is why our president choose to commission trains instead of coming to commiserate with the people of the state.”

Earlier in his welcome address, Speaker Yakubu Dogara said: “From the senseless killings in Rivers State, to the killing rampages in Benue, Taraba, Kaduna, Zamfara, Adamawa, Edo and other states; our dear country is now being painted red with the blood of the innocents on account of unremitting bedlam callously promoted by cold hearted merchants of death.

“This House has passed many resolutions on the issue of herdsmen, cattle grazing and cattle rustling. There have also been several resolutions on kidnapping, Boko Haram terrorism and sundry security matters.

“These resolutions are more of a wake-up call to the Executive on its constitutional obligations in governance. The accentuation of violent crimes is a chronic symptom of defects in our security architecture, which we must fix.

“I therefore call on Mr. President to apply maximum sanctions on public officers who are derelict in the performance of their duties.

“We cannot afford to fold our hands and pretend that all is well with our country. We have a responsibility to all Nigerians regardless of creed or ethnicity.

“We expected that with the legislative cooperation given to the Executive arm, to effect an increase in the fuel price from N87 per litre to N145, and based on their assurances, incidents of fuel scarcity would be a thing of the past. “We were also assured that fuel subsidy had come to an end. From recent developments on this subject, except the Executive adduces compelling reasons why the reverse is the case, we will be justified in feeling betrayed.