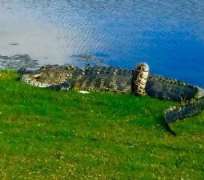 Several golfers in Naples on Friday had their games interrupted by an unusual, yet very Florida, sight: a python wrapped around an alligator with its head in the gator’s mouth.

Richard Nadler was among several golfers to post photos and videos of the encounter at The Golf Club at Fiddler’s Creek on social media.

“‘Wild’ day on the 10th hole today!” Nadler posted along with several photos of the pair next to a lake. “That’s a an alligator and a Burmese python entwined. The alligator seems to have the upper hand.”

Several witnesses said they saw the alligator eventually drag the snake into the water, WILX-TV reported. Security personnel from the club were on hand to make sure no one got too close to the animals.