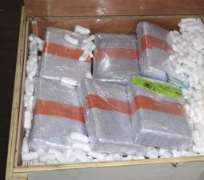 Officials said they discovered 317.5kg of cocaine hidden inside bedroom furniture and kitchen cabinets that had been shipped from Puerto Rico.

It’s the largest drug bust of the decade, officials said.

With a street value of $22 million, 250 bricks of cocaine were concealed behind false walls inside the furniture.

“Customs and Border Protection knows that transnational drug trafficking organisations will take advantage of natural disasters, and in this case, an island struggling to (recover) from a crippling hurricane, to smuggle dangerous drugs to our nation’s mainland,” Joseph Martella of CBP said in a statement.

“CBP officers remain ever vigilant to interdict narcotics loads, and we are pleased to have stopped this deadly poison shipment before it could hurt our communities.”

The furniture was searched after officers detected something unusual about one of the shipping containers, but they did not elaborate on what tipped them off.

An investigation into the shady shipment is ongoing.