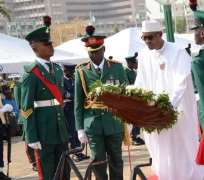 PRESIDENT Muhammadu Buhari and Vice President Yemi Osinbajo on Monday led Service chiefs, other top government functionaries and members of the diplomatic corps to lay wreaths in honour of those died in service in Nigeria and at international assignments.

The News Agency of Nigeria (NAN reports that the ceremony, which is an annual event, was to mark the climax of activities of the 2018 Armed Forces Remembrance Day celebration.

The ceremony which holds on Jan. 15 of every year, at the National Memorial Arcade in Abuja, is also dedicated to appreciating surviving military men who have retired from active service.

The wreath-laying ceremony came after over a month that the 2018 Armed Forces Remembrance Day emblem and Appeal Fund was inaugurated by President Buhari in the Presidential Villa, Abuja.

President Buhari, who arrived the venue of the event wearing a white traditional attires known as ‘Babanriga’, in a colourful motorcade made up of the limousine flanked by horse riders, inspected the parade of Army, Navy, Air force, and Nigerian Legion.

The 2018 Armed Forces Remembrance with Theme “Appreciating the Contributions of the Armed Forces in ensuring peace and Security”, started with Christian and Muslim prayers offered by Group Capt. Kwashau and Shehu Mustapha.

The event which featured a parade of Officers and Men of the Armed Forces and Nigerian Legion, also witnessed a `One Minute Silence’ for the fallen heroes, before the wreath laying ceremony.

President Buhari laid his wreath at the tomb of the unknown soldier with precession, followed by the Vice-President, Prof. Yemi Osinbajo, who also laid his wreath.

Others who laid the wreaths included the Senate President Bukola Saraki, Speaker of the House of Representatives, Yakubu Dogara, and Chief Justice of Nigeria, Justice Walter Ononghen.

Others were the Ministers of Defense and Federal Capital Territory Abuja while the Chief of Defence Staff, Gen.Gabriel Olonisakin led the Service Chiefs and Inspector General Police to lay their wreath.

The last set consisted of the Chairman of the Nigerian Legion, Doyen of Diplomatic Corps, and the Representative of widows, Mrs Mary Anecholu who wore a black gown.

President Buhari later released some white pigeons to signify unity and peace in the country, after which he signed the Anniversary register.