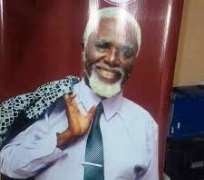 I extend to you, sir, the compliments of the season. I also congratulate you for being among the living appointed as a parastatal Board Chairman along with your dead compatriots by President Mohammadu Buhari. It is an appointment that you really deserve for your loyalty to a destructive tyranny.

The ferocity with which you consistently deploy your seminal intellectual gift to defend the lies, deodorize the falsehood, excuse the incompetence, rationalize the unbridled kleptomania, nepotism and sectionalism as well as justify sponsored murders and ethnic cleansing by and of the Buhari Administration, your appointment could not have been more or less, well deserved. So, once again, congratulations.

Sir, I consider writing this letter to you a public duty in the defence of sanity and an obligatory responsibility to posterity. I must confess that I am actually inspired by the great sage, Obáfémi Awólówò's remonstration that it is the duty of those who wish society well to call to order those who seem implacably committed to the destruction of our polity, especially for pecuniary gains. Without trying to be self righteous, I am concerned that you could not claim to wish our society well when you always employ sanctimonious sophistry to justify the murders of innocent citizens and the miseries of our peoples.

Putting all the blames of what is presently going on in the country under the incompetent Mohammadu Buhari on former President Goodluck Ebele Jonathan, regardless of how bad he was in office, seems to have gone out of fashion. It appears it has become septic, sterile and stale. But for implacable apologists of tyranny and enslavement of the Yoruba Nation like you sir, it has been difficult for you to accept this reality. Like the proverbial Ostrich, you are in denial that we have a savage and a sadist in the saddle.

As a Columnist in the Nation Newspaper sir, you have a platform through which you consistently puke putrid partisanship devoid of balance, allergic to facts, dyspathetic to evidence, antagonistic to common sense, averse to integrity, immune to fairness, hostile to justice and intolerant of and to being called out for your glorified inanities, sour sophistry, mean montebanking, and intellectual somersaults. You twist obvious truths and marinated yourself in parlous propaganda without sparing a thought for the miseries on our streets, the hunger, need, want and pulverizing poverty permeating the nooks and crannies of this country as well as the tragedies of loss of lives occasioned by the ethnic cleansing of other nationalities by the Fulani tribesmen tacitly supported by President Buhari.

On your Facebook, I have monitored with trepidation how you have abandoned humanity and humaneness. I have watched and read your agonizingly laborious efforts to explain away the tragedy in Benue State and exculpate the man who just gave you an appointment as a Board Chairman of a Federal Parastatal. I was wondering, as I amazed at the level to which you have stooped to drag your pedigree and the integrity that some of us thought you had. Yes, I wondered what would a man not do for a board appointment!

In Yoruba land, we take life of human being to be very precious. Our Culture dignifies human life and even in death, respect, honour and decency is accorded the dead. Life, in Yoruba Culture, is unquestionably a sanctity. It is sacred. It is hallowed. It should not, could not and must not be taken with and in levity. As a product of this Culture sir, I expected you to exude, exalt, extol and ennoble the lessons and pride of Yorùbá Culture. I expected you to recognize the limits of partisanship where human lives are concerned. I expected you to be able to apply brakes and think before you begin to excuse political sadism, meanness, cruelty, wickedness, incompetence and insensitivity in the name of politics or partisanship.

I am aware that you have spoken of "home training" or "Èkó ilé" as part of what had to be exuded as a fundamental of our "Omoluabi" ethos in Yoruba land, especially in our relationships and public conducts. But it seems sir, that the exudation of such responsibility by those who are also advanced in age like you is lost on your good self. This is because it is difficult to reconcile the acts of peddling lies, hawking falsehood, mongering fibish propaganda wrapped in the reeking cocoon of dubious intellectualism to having "home training." The juxtaposition of the two does not jell. They don't go together.

Part of the aphorism of our forefathers in Yoruba land goes thus:

Since I have known you sir, Dr. Orebe, you have never worn the garb of dishonesty and hypocrisy so unashamedly and with unchecked enthusiasm. Getting psychoanalytical, you seem to manifest signs of political anxiety and jitter. Your antics show signs of desperation of a noxiously distinguished sentry of calamity and cataclysm. It is evident that you are nervous that your propaganda is failing in their effectiveness. In an attempt to justify the selling of Yoruba race into Hausa Fulani slavery by your cult of disguised looters (euphemised as "progressives"), you are taking a step further to make a mockery of our Yorubaness, trivialize our values and sacrifice our age long respect for humanity by excusing the murders in Benue by exonerating President Buhari.

It is my belief that your desperation to whitewash the Daura Dundee and exculpate him of the murders of the Benue people among others is to soften the responsibility of your cult headed by Asiwaju Bola Ahmed Tinubu in his role in foisting Mohammadu Buhari on Nigeria. You know that the time of reckoning is nigh. You know that the Yoruba people would ask questions about how we have been led in the last few years. You know that there is possibility that you and your cult would be held accountable. So, defending Buhari's incompetence and rationalizing the tragedies he has caused is a task that must be done at all costs and by all means.

But the Yoruba Nation would not be fooled. The loud silence of Asiwaju Bola Ahmed Tinubu, who sees himself as a leader of Yoruba in the face of these gruesome murders across the country is getting to be very instructive. From the murders and arson at Ketu, Lagos; the brouhaha at Shagamu, Ogun State over the practising of our Orò tradition by the Fulani guests; the murder and destruction of our farm in Yoruba land and in other parts of the country; the kidnapping of Chief Olu Falae and the murder of his men to many other heinous crimes by the Fulani marauders, Asiwaju Tinubu has been nowhere to be found.

The hallmark of leadership is for your people and your followers to be able to count on you in times of need. Your people must be able to have your shoulder as a succour in the time of grief. You must be able to stand for your people and defend them when they are vulnerable. You don't keep silent when your people are torn to tatters by tyranny. You demonstrate your character in times of adversity. Asiwaju Tinubu has failed woefully in this respect. Those who voted for him/his candidates and have been calling him "Asiwaju" are still wondering what happened?

But desperate sentries like you sir, Dr. Orebe, are becoming more liabilities to Asiwaju Tinubu than you could imagine. By your persistence at lies, peddling of falsehood and panhandling of putrid propaganda, you are annoying the people more. You're insulting the populace. You're disrespecting them. Those who might be inclined to forgive Asiwaju Tinubu for his unmitigated error (if we could call it that) on bringing this tragedy called Buhari to and on us, wouldn't be willing to do so for being taken as fools and idiots.

Our people on the streets are living the reality of Buhari's tragedy and tyranny. They listen to the news. They experience the hunger, the inflation, the fuel shortages, the insecurities, the murders, maiming, raping and arson on regular basis. Trying to tell them that what they are experiencing is a mirage infuriates them. So, why don't you, for a change, imbibe honesty in your analyses? Why don't you stop lying to yourself and your readers? Why don't you stop insulting the reading public who are mainly victims of this Buhari's wickedness? Why don't you give Asiwaju Tinubu the possible opportunity for him to be forgiven for his miscalculation? Why? Why?

The skills of painting"black" into "white" to deceive people is becoming stale. You sir, should tell your bosses that their political philosophy of mercantilism has ruined the Yoruba Nation and brought Nigeria to precipice. Others may be afraid to speak, some are not. A cult of leeches, rapacious locusts appropriating our Commonwealth in Yoruba Nation would not be able to hold us to ransom for too long. Defending thieves in Aso Rock, their satellites in all strata of governance, and certified kleptomaniacs by hacks like you, Dr. Orebe, is a disgraceful assignment. It tarnishes our collective History, Heritage and Tradition in Yoruba land.

2019 is around the corner. Despite his unguarded ambition, his imperfections, his monumental miscalculations, the likes of you sir, Dr. Orebe, who are unrepentant liars and professional propagandists, should not be allowed to totally destroy Bola Ahmed Tinubu's political usefulness. With your lies and falsehood peddling, Dr. Orebe, you are poisoning the public and political space for Tinubu. Your ilk should not take away from Tinubu the opportunity to be redeemed. There is always a second chance for a sinner in Tinubu. Coming clean, accepting his mistakes and apologising to the Yoruba Nation in particular and Nigeria in general for the tragedy of Buhari would go a long way to soften minds towards him. But consistently insulting the intelligence of the public via vile lies would destroy rather than rebuild Tinubu.

It is my sincere hope that Bourdillon would call you to order and debrief you. This is imperative so that you don't end up breaking the soup pot for all of them. In addition, my brother, friend and colleague, Femi Adesina should be able to reassure you that you didn't have to drown yourself in the ocean of indignity before your appointment as a Board Chairman of a Federal Parastatal could be guaranteed. It is time you stop lying. It is time to begin to apologise to Nigerians about your role in foisting Mohammadu Buhari on them.

As pointed out in several fora I would reiterate in my usual trademark statement that LIES NEVER LAST, HISTORY NEVER DIES AND THE TRUTH IS ALWAYS CONSTANT.

Dear Dr. Orebe, I was concluding this important letter when the supposed SUMMARY OF FULANI NATIONALITY MOVEMENT reached me. Hopefully you would get to read it so you could realize the extent of your disservice to the Yoruba Nation as a result of your unbridled partisanship that has cost you your honour and integrity.