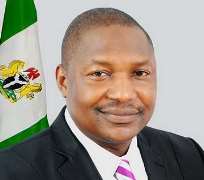 As I am inclined to brood over the state of your principal function as the Attorney General of the Federation, I could not have suffered my thoughts to have it smeared by the consequence of opinions to have thought the pen was placed wrong in initiating this address. As much as I do not wish and never will to wet-nurse the sensitive nature of your office as one acclaimed to be the number one legal officer of the Federation, I presume your knowledge of the foremost responsibility of your office as one advisory of Government and the misfires you make of the office is now one too many an unbearable ignominy for Nigerians.

Perchance, my conscience makes me impervious to caution but, my believe that you do not really know the saltiness of the position you occupy is now more unshakened; when to take actions and proffer same not contradictory to the public welfare as the Minister of Justice of Nigeria is even further fortified by the quiescence your office has assumed over pressing matters of life and death in the country of late and your grating failure to so realize and advise the President in spite of the public’s call. Rather an effort to bog down the senate investigation into Maina’s saga is all that freaks you at the moment.

There have been fishy cries that may not have drawn the attention of many Nigerians to your smokescreen policy in smothering the efforts of the senate probe and should Nigerians continue in the mistaken belief that always often the wailing of a baby is a call of attraction for hunger and not something more suspiciously trepid the worse for the significant many. Portent signs indicates that recent happenings in the country is now one of no concern to your office as one cannot see why your office has not thought it appropriate being the number one legal officer to advise the diehard President on the legal implications of the continual Fulani militias killing in the country and even on the much talked about restructuring, rather you seem to have capitalized upon and employed as baits on Nigerians this policy to divert what you seek ahead from public consideration. As I can best and quickly summarize your policy in the saddest of lapidary formula; “that you are bent on quickly sweeping the once publicized massive pension loot by Maina and your alleged involvement under the carpet”, the better for Nigerians understanding.

Before the President had declared a peaceful and organized oriented IPOB a terrorist organization you would not say your office did not add her voice nor washed her hands off that singular presidential declaration with some legal opinions you readily provided the President with. It has come to a matter of life and death where herdsmen can kill as much as one can recite his multiplication tables and yet your office, your acclaimed office has not considered it worthy to advise the President on the legal implication and otherwise of the continual killings by the Fulani herdsmen in some part of the country even in spite of the public’s call to declare them a terrorist organization.

As seen through the recent ex parte application you filed before a High Court sitting in Abuja seeking to stop the investigation by the National Assembly into how the former Chairman of the Presidential Pension Reform Task Team, Abdulrasheed Maina surreptitiously gained his way into the service, one can only safely say that you seek to achieve the most for Nigerians the enhancement of the death of the senate probe into the Maina saga while you bury other pressing matters of life and death in the country at your backyard. As I write to quickly inform your office of the implication of the recent advances you have made so far to frustrating the ongoing Senate probe on the Maina saga as that seem to you what is paramount to the enhancement of the commonweal at the moment, I sternly admonish you properly utilize your office in this your committed assignment to torpedo the senate’s probe while it last. For the good you desire from your recent court action is not one for the good of the public rather how to get yourself out of the enmeshed mud you consciously threw yourself into and avoid you being publicly exposed as a major aider in the Maina’s reinstatement.

As a backdrop to your submission before Judge Binta Nyako of the High Court sitting in Abuja that the Senate cannot constitute itself into a court to trial the executive arm over the discharge of its duties, it is rightfully rebutted that at no point did the Senate constitute itself a court to trial the executive rather the senate carried out its constitutional duty of investigation into the saga.

By the provisions of Section 88 (1) (b) (i) of the Constitution of the Federal Republic of Nigeria, 1999 as amended, it is provided thus:

“Subject to the provisions of this Constitution, each House of the National Assembly shall have power by resolution published in its journal or in the Official Gazette of the Government of the Federation to direct or cause to be directed an investigation into-

(b) The conduct of affairs of any person, authority, Ministry or government department charged, or intended to be charged, with the duty of or responsibility for-

(i) executing or administering laws enacted by the National Assembly”.

The mere fact that Malami is not directly involved in the Federal Civil Service Commission does not absent him as one the Senate should not probe as merely a public officer of the government makes him responsible as a person in the execution of the Code of Conduct for Public Officers; a law as well enacted by the National Assembly. The Code of Conduct for Public Officers, particularly Section 1, Fifth Schedule, Part 1, of the Constitution of the Federal Republic of Nigeria 1999, is to the effect that:

“A public officer shall not put himself in a position where his personal interest conflicts with his duties and responsibilities”.

This means that a public officer who puts himself in such a position as to have his personal interest conflict with his public duties and responsibilities has invariably painted himself to a corner where the National Assembly can investigate his conduct or state of affairs as far as the Code of Conduct for Public Officers remains a law enacted by the National Assembly. Malami been a public officer ought not as alleged to have used his position as the Attorney General of the Federation to aid in the reinstatement of Maina apparently for his personal interest over his public responsibilities and one then would not be too flummoxed by his recent desperate moves to court in the light of the above, only to apply ex parte for a stop to the senate probe. This could only be an overzealous approach to his personal matters he considers very important at this critical moments in the history of Nigeria and probably accounts for why he has not had the time to properly advise the President on the legal implications of not restructuring the country at the pace she is going and the continual herdsmen killings and other connectedly pressing Nigerian-draining issues.

In spite of the crass flout of the rule of the law in Nigeria, the rule of law is one such that ought to be followed ideally in a sane society and its meaning would be best appreciated in present day governance in our everyday living each time we recall what had happened when there was no rule of law. But, that does not seem to be as one can hardly rack ones brain to recall upon a time the rule of law ever existed in this country. I see no reason why Malami cannot readily comprehend the National Assembly’s purpose for the ongoing probe as the rule of law is that the investigative powers of the senate is exercisable solely for the purpose of exposing corruption, inefficiency or waste in the execution of laws enacted within its legislative competence and as well the administration of funds appropriated thereto (See Section 88 (2) (b) of the Constitution of the Federal Republic of Nigeria, 1999). If the number one legal officer of the Federation finds it obtrusive of the Senate’s involvement in the investigation process into Maina’s massive pension loot spree of which the former is allegedly involved simply to expose corruption, inefficiency and waste of funds appropriated thereto, then one will only imagine if anything good can come out of his office for Nigerians at the moment and even the January 15th hearing of both parties before Judge Binta Nyako is now more threatened from his series of disloyalty to Nigerians.

When a child can no longer or her hand too short to scratch the very centre part of her back where it itches her the most, she will unknowingly draw the attention of people to her rescue, one will by then realize that what has been covered with clothing has unknowingly been exposed to the public. The current Attorney General seeks help from the court as to protect himself from being further exposed by the Senate in the ongoing investigation for what unknowingly he’s exposing to Nigerians; his weakness and twittery body languages may soon discover so late after the damage may have been made known to all that he has indeed been making a fool of himself and not Nigerians.

My fears are only heightened by the desperate maneuvers of the Attorney General and the by-all-cost means to have the Senate come to court as hearing notices issued by Judge Binta Nyako to the applicants in her chambers to have the defendants including the senate attend court on the adjourned date of January 15th, 2018 giving reasons why the probe should not be stopped is simply his wand of chicanery to delaying the ongoing probe.

If the Attorney General feels he can always get out of jail free card because he is the alpha of legal officers in the country should have a rethink as some civil society organizations are warming up to slam his office with a billion naira suit for the way and manner he has failed Nigerians as a public officer who seems to act arbitrary of his office as the Minister of Justice of the Federation.