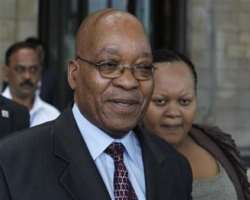 Polygamous South African President Jacob Zuma is battling another scandal concerning his private life, this time involving newspaper reports his second wife is pregnant after an affair with her bodyguard.
The Star newspaper said on Saturday the National Intelligence Agency had been called in to investigate the reports, which surfaced this week alleging Nompumelelo Ntuli Zuma slept with Phinda Thomo, a member of her security detail.

Zuma's office broke its silence on Friday, saying the reports violated his privacy and were part of a coordinated smear campaign.

The reports, which started mid-week in the Zulu-language Ilanga newspaper, are based on an anonymous letter written by "concerned family members" and leaked to several South African media outlets.

"The reports appear to be part of an ongoing and malicious campaign to undermine the right of the President and his family to privacy and dignity," the Presidency said in a terse statement.

"President Zuma continues to be seized with matters of State and will not be diverted from his duties," it added. "He will not dignify such gossip with a response."

Zuma, whose colourful private life has often overshadowed his status as the leader of Africa's largest economy, is due to return on Saturday from a state visit to India, where he was accompanied by Ntuli Zuma.

Whatever the truth, the latest scandal to emanate from the 68-year-old's complex marital situation is likely to cause embarrassment in South Africa as it prepares to host the soccer World Cup, which kicks off in Johannesburg on June 11.

The Presidency statement failed to stop papers such as the Star, which said it had a copy of the letter, publishing lurid details.

Separately, the Mail and Guardian newspaper said Natuli Zuma "went beserk" when she learnt Zuma was taking a third wife in January.

The Star said Zuma was "incensed" by the revelations and had ordered a family summit at his home in KwaZulu-Natal province.

In February, Zuma confirmed he had fathered an illegitimate child with the daughter of Irvin Khoza, a close friend and head of the World Cup local organizing committee.

Multiple marriages form a part of Zulu culture and are allowed in South Africa. Zuma, a Zulu traditionalist, has been married five times, but currently only has three wives. He has 20 children.