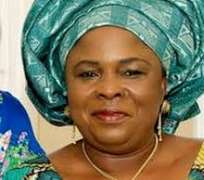 The court on Friday, 12 January, dismissed the appeal of the defence team led by  renowned lawyer, Mike Ozekhome (SAN).

The Court of Appeal, Lagos Division, made the judgement on Friday.

It upheld the decision of the Federal High Court in Lagos, which had earlier ordered the interim forfeiture of a sum of monies found in her  Skye Bank account.

The appellate court, in a lead judgment by Justice Mojeed Owoade, threw out the ex-President's wife's appeal challenging the forfeiture of the funds to the Federal Government.

According to the court,  the appeal lacked merit.
Justice Mojisola Olatoregun of the Federal High Court in Lagos had, in April last year, ordered the temporary forfeiture of the funds after the Economic and Financial Crimes Commission argued that the money was reasonably suspected to be proceeds of fraud.

Apart from Patience's personal account with $5.9m, the judge also froze a number of accounts linked with her including an Ecobank account with a balance of N2.4bn opened in the name of one La Wari Furniture and Bath Limited.

But efforts to secure an order for the permanent forfeiture of the money was opposed by Patience, through her lawyer, Mr. Ifedayo Adedipe (SAN).

Also, Chief Mike Ozekhome (SAN), on behalf of La Wari Furniture and Bath Limited, opposed the permanent forfeiture of the funds in its client's account.

The two lawyers subsequently went on appeal, seeking to overturn the temporary forfeiture order and recover the funds.

But the appellate court on Friday dismissed their appeals.

The EFCC had, in an affidavit it filed before Justice Olatoregun, said its investigation revealed that Patience opened the Skye Bank account on February 7, 2013, and used it to allegedly “warehouse proceeds of crime.”

According to an operative of the EFCC, Musbahu Abubakar, the former first lady made several cash deposits in United States dollar into the account, through a former Special Assistant to ex-President Jonathan, Waripamo-Owei Dudafa; and a State House steward, Festus Iyoha.

The EFCC had prayed the court to urgently freeze the account so as to prevent Patience from moving the funds.

Justice Olatoregun had then granted the interim forfeiture order and adjourned till May 22, 2017 for anyone interested in the funds to appear before her to show cause why the funds should not be permanently forfeited to the Federal Government.