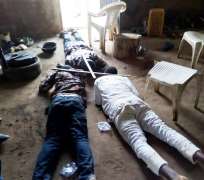 The operation which was jointly carried out by NSCDC operatives and policemen led to the arrest of three ritualists and some charms and other items were also recovered from building.

The suspects include a 40-year-old Kayode Olaniyi who was said to be the herbalist and one Ojo Sunday who is 30-years-old as well as one Kayode Ezekiel, 35-years-old.

The Nigerian Voice gathered the the building was raided when a commercial motorcycle operator reported to the NSCDC men that some people attempted to kidnapped him into the building.

The commercial motorcycle operator told the NSCDC men that he narrowly escaped from the ritualists. He said that the ritualists attempted to kidnap him into the building for ritual.

NSCDC Public Relations Officer in the state, Mr Wale Afolabi told The Nigerian Voice that upon the report by the commercial motorcycle operator, the NSCDC notified the police and the building was raided.

He confirmed that three persons were arrested and exhibits were recovered from the building after the operation. "The suspects have been detained at the ljamo Divisional Police Headquarters in Ilesa. The matter is under investigation", Wale stated.