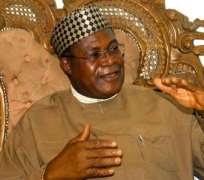 San Francisco, June 05, (THEWILL) – THEWILL can report that barring any last minute changes, Dr. Okwesilieze Nwodo will be presented to the PDP leadership as the new Chairman of the Peoples Democratic Party, PDP.

THEWILL gathered that PDP governors and party leaders from the South-East after various consultations last week settled for Dr. Nwodo and thereafter met with President Goodluck Jonathan on Friday to inform him of their preference for the former National Secretary of the party during the first term of General Olusegun Obasanjo’s administration.

Those present at the meeting with Jonathan were Governors Sullivan Chime (Enugu); Ikedi Ohakin (Imo) and Martin Elechi (Ebonyi). Also at the meeting were Deputy Senate President and leader of the PDP in the South-East, Senator Ike Ekweremadu, Chief Whip of the House of Representatives, Mr. Emeka Ihediora and Chief of Staff to the President, Mr. Michael Ogiadhome.

President Jonathan was said to have accepted Nwodo’s candidacy since the leadership of the party from the South-East unanimously backed his candidacy.

Nwodo is expected to be presented to the Board of Trustees (BoT) of the party on Monday at its meeting at the Presidential Villa, as Chairman-designate and subsequently to the National Executive Council (NEC) of the Party on Tuesday.