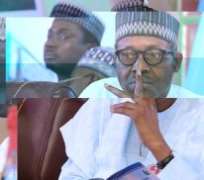 THE Presidency, yesterday, took a swipe at the 7th National Assembly headed by former Senate President, Senator David Mark; Ex- speaker, House of Representatives and now governor of Sokoto State, Aminu Tambuwal, saying if the lawmakers had carried out an effective oversight function, the unfolding scenario of probe of former National Security Adviser, Col. Sambo Dasuki (retd), over alleged $2.2 billion arm deal would have been averted.

The Presidency, which also indicted the then Deputy Senate President and the incumbent Deputy Senate President, Senator Ike Ekweremadu, senators and members of the House of Representatives, who were in the 7th session, said the lawmakers concentrated less attntion on oversight functions, hence they could not uncover the alleged loot of $90 billion under the former Minister of Petroleum Resources, Diezani Alison Madueke, and other probes the current 8th Senate was carrying out.

Addressing journalists yesterday, Senior Special Assistant to President Muhammadu Buhari on National Assembly Matters (Senate), Senator Ita Enang, who described the current Senate as the best period of relationship between the Executive and the Legislature, said what obtained now was a very active legislature.

He said the current Senate had in its two years, passed more bills and doubled what the 7th Senate did in four years, adding that it had done 200 per cent because of less of politics. He noted that the legislature had been very active and productive in terms of legislations passed, adding that though he was also a member of the last Senate, he was apologising for lack of effective oversight on the agencies of government.

Enang said:  “If the committees in the 7th National Assembly were doing their job, checking what was happening in the office of the National Security Adviser, NSA, Petroleum Ministry, we would not have had Diezanigate and all the other gates.

Do the work and politick less “We will not have all the probes. Because the legislature concentrated less, that is why we are having the spill that the 8th Assembly is having. I feel guilty and I want to apologise. If the legislature did its duty like it is doing now, I think we will not have this situation.” Enang, who promised that 2018 would be a very robust year in executive-legislative relationship, however, urged both the executive and the legislature to “do the work and politick less; concentrating in legislation and least concentrating on other matters.”

No budget padding He disagreed with senators on the issue of padding of the 2018 Appropriation Bill, saying there was no such thing as padding in the budget, as the proposals were documents which could be seen as dead on arrival. Senator Enang said:  “You are not going to have uncommon compromise; you are going to have engagement, not something combustible.” While answering questions on padding, Enang said:  “In all my legislative years, padding was a new word in the legislative lexicon, so we have to define it as a new matter.

''In my opinion, padding is an illegal or unlawful insertion by a person who is not expected to do it into a legal, purely completed legislative document. Therefore, unless a bill has been passed and forwarded to Mr President for assent, there can be no padding. “If the Bill had been forwarded to the President and something is inserted into that before it is assented to by any person and something is added different from what is in the votes and proceedings of the Senate and the House of Representatives, is what constitutes padding.

“On the part of the executive, if a Bill is forwarded to Mr President, be it a Bill on any matter or budget and the President or the Governor, something is inserted by the Governor or by the executive into the Bill before assenting, that is padding. “Again, if after a Bill had been assented to by the President, and forwarded to the National Assembly for publication and gazetting and somebody inserts something into it before publication in the gazette, that is padding. “Because you are adding an illegal, unlawful entry into a document that is legal and that is contamination of the document.”

According to him, since the 2018 Budget is pending before the legislature, the executive is free to make inputs and that does not constitute padding. “Whenever the executive presents a bill before the House of Assembly or the National Assembly, that instrument is work in progress, it is a draft. In the course of considering legislation, there can be no padding because either side can make inputs, Enang explained