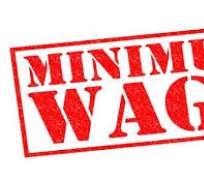 A very wonderful week to you. I am sure you are still in the euphoria of the New Year. This week

affect the ordinary citizen. Since the are cries by the masses for government to increase

the minimum wage of workers. Get hooked.

Minimum wage is the lowest remuneration that employers can legally pay their workers.

Equivalently, it is the price floor below which workers may not sell their labor. Although

minimum wage laws are in effect in many jurisdictions, differences of opinion exist

about the benefits and drawbacks of a minimum wage. Supporters of the minimum

and boosts morale. In contrast, opponents of the minimum wage say it increases

workers) and is damaging to businesses, because excessively high minimum wages

expense of paying a higher wage.

Modern minimum wage laws trace their origin to the Ordinance of Labourers (1349), which

England. King Edward III, who was a wealthy landowner, was dependent, like his

lords, on serfs to work the land. In the autumn of 1348, the Black Plague reached

England and decimated the population. From where it has spread to other countries like Nigeria.

Here I state some of the advantages of minimum wage

The Economic Policy Institute is an economic research group located in Washington, D.C. and it concluded in a 1999 study that nearly 40 percent of the minimum wage earnersare working parents. To go even further, nearly 33 percent of the minimum wage earners are married couple raising children. Without a minimum wage, these workers may be forced to work for less money. And they may not be able to support their children and family effectively this can in turn lead to corruption, as they workers will be tempted to steal at the slightest opportunity to make up for their poor pay.

A person making at least minimum wage is not using as many public services as someone on unemployment, according to economics expert Professor Brock Haussamen. An unemployed

worker is given welfare, rent assistance and food stamps in many states. With minimum

wage, the need for public assistance is lowered and this reduces the tax burden on the

community and the state.In the case of Nigeria, a person on minimum wage will likely borrow less and will render help to family members and other effectively.

his minimum pay will be, according to economics website Economics Help. An

the minimum wage to determine the financial incentive to taking a job. And will be able to gladly decide if the job is favourable or if he should continue to stay unemployed.

Without a minimum wage, it can be difficult for small businesses to budget their money. With a

minimum wage in place, a small business owner knows what he will be expected to pay

per hour and he can create new jobs with his company based on this budgeting information.

employers. The worker knows upfront what kind of wage she can expect, and the employer does not have to go through the process of negotiating a wage with a new employee.

1. Unemployment. If labour markets are competitive, a minimum wage could

cause unemployment because firms will demand less labour, and higher wages may

encourage more workers to supply their labour without a second thought.

2. Firms may become uncompetitive. In some cases, a higher minimum wage could push up costs causing a firm to go out of business because they may not be able to

afford wage costs. This might be a particular problem if the firm is competing in a global

countries. For example, a higher minimum wage may encourage firms to manufacture

clothes Aba or Uyo where labour is cheaper than Lagos.

firms face an increase in costs which are likely to be passed on to consumers. This is

even more likely if wage differentials are maintained.

4. Black market. A minimum wage may increase the number of people working on

the black market so firms can avoid paying the legal minimum wage, especially in a country like Nigeria where anything can happen.

5. Poorest don’t benefit. A limitation of the minimum wage is that it doesn’t increase the

incomes of the lowest income groups. This is because the poorest have to rely on benefits and

are therefore not affected by minimum wages.

6. Limited impact on relative poverty. Many who benefit from the minimum wage are

second income earners, and therefore the household is unlikely to be below the poverty

line. A household with a single income earner just above the minimum wage is likely to be

relatively poorer. But they will not benefit from the minimum wage.

THOSE WHO MAY NOT BENEFIT FROM THE MINIMUM WAGE

1. Babysitters on a casual basis

2. Companions for the elderly

Nigerian workers have gone through a long journey to get a decent minimum wage, which the Senate passed on Tuesday, February 22, 2011 started long

before the late President Musa Yar’Adua, on July 14, 2009, through the then Secretary to

the Government of the Federation, Alhaji Mahmud Yayale Ahmed, inaugurated a

The Belgore Committee, set up after Labour and its Civil Society allies began nationwide

rallies and march protests on new minimum wage, planned full deregulation of the

Electoral Reform Commission, NERC. Leaders of Nigeria Labour Congress, NLC, in December 2008, after a report of an internal committee it set up look to work outappropriate minimum wage, publicly demanded for N52,.200 minimum wage for workers, which was never implemented. Looking at the Nigerian situation, I support the increase of minimum wage of workers to something reasonable, so that the average man can survive, become the N18,000, is no longer beneficial looking at the high cost of living.

Keep a date, see you next week.

Ubong Writes for The Nigerian Voice, He lives in Uyo.