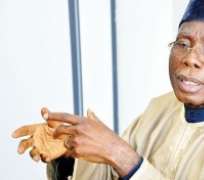 Chief Audu Ogbeh, the Minister of Agriculture and Rural Development, said on Monday that agriculture sector created six million jobs in the in the last two years.

Ogbeh said this while analysing the achievements of his ministry and 2018 targets of the ministry at a strategy retreat in Abuja.

The minister was reacting to reports that over four million jobs had been lost in over two years of President Muhammadu Buhari-led Federal Government.

He explained that the six million jobs were created both on and off farms as a result of the huge increase in local rice production.

According to him, our agriculture is heavily manual and to be able to reduce rice importation by 95 per cent, at least six million extra jobs have happened in the farm.

“There are about 12.2 million members of the Rice Growers Association; we have created more jobs than we have lost,'' he said.

The minister said the country earned 31 million dollars from the sale of purple hibiscus popularly known as zobo leaves in the last one year and that the demand was still increasing.

“We are exporting more than we are importing now and most exportation is agro-products.

“We are growing in agriculture and from the middle of this year; whoever chooses to eat Thailand rice is welcomed to pay duties.

“We shall impose duties on it because we consider it a wasteful luxury and something this country can't afford,'' he said.

Ogbeh said the Federal Government would also engage in establishing both cashew and cocoa plantations to boost production and export in 2018.

He said that plans are underway to make the country leading producers in cashew nuts.

The minister said that fertiliser blending would also be improved to accommodate micro nutrients in the product.

Ogbeh said the government would also work to ensure quality control of produce both for export and local consumption. (NAN)