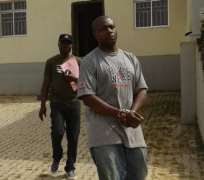 Good Lomé, January 8, 2018--Nigerian authorities should immediately release Timothy Elombah, editor of the news website Elombah, the Committee to Protect Journalists said today. Security forces arrested the journalist at his home in Nnewi, a city in Anambra state, on January 1, 2018, according to his lawyer, Obunike Ohaegbu, and media reports .

Timothy Elombah's brother, Daniel, and Ohaegbu told CPJ that police raided the family home in the early hours, and arrested the journalist, Daniel, and four other men. Police questioned the group separately for several hours and then released everyone except for Timothy Elombah, according to his brother. Daniel Elombah added that police told them the inspector general ordered their arrest because of what he called a defamatory article published on a news website called Opinion Nigeria . The December 22 article was critical of Nigeria's Inspector-General of Police, according to the Premium Times .

Elombah covers Boko Haram and has reported critically on President Buhari's son. Daniel Elombah, who is the website's chief executive, denied that Elombah had anything to do with the article that police said was the basis for their arrest. He added that police have charged him and Timothy Elombah with cybercrime.

Daniel Elombah, who is based in London, said that police have banned him from travel, which means that he and his family cannot return to their home in the U.K.

Jeff Okoroafor, the founder and publisher of Opinion Nigeria told CPJ that police requested the article be removed, but that he refused. He said no further action was taken. Ebiowei Dickson, who wrote the article, did not immediately respond to CPJ's email.

"Nigerian authorities should immediately release Timothy Elombah, drop legal proceedings, and allow his brother Daniel to return home," said CPJ Deputy Executive Director Robert Mahoney, in New York. "Police have no business raiding a journalist's home and locking him up just because an officer does not like something written in the press. It's not even clear that the man they have detained had anything to do with the article they deem defamatory."

When CPJ called the Nnewi police station, the person who answered the phone said that they were not permitted to comment on the case and hung up. CPJ contacted the Nigeria police Public Complaint Rapid Response Unit for comment but was directed to call the Abuja police. CPJ's repeated calls to the police headquarters in Abuja went unanswered.