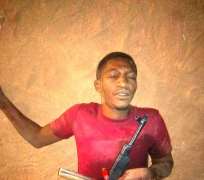 A suspected armed robber was killed by men of the Ogun State Command of the Nigeria Police Force at Ososa junction on Shagamu-Ore expressway on Sunday.

The Police Public Relations Officer in the state, Mr Abimbola Oyeyemi told The Nigerian Voice that the men of the Ogun State Police Command received a distress call from the operatives of the Federal Special Anti Robbery Squad that armed robbers were operating on the road.

According to the PPRO, "Upon the distress call, the officer in charge of FSARS DSP Uba Adam led his men to the scene where the robbers engaged them in gun duel which lasted for about 45 minutes."

Oyeyemi continued, "At the end of the encounter, one of the robbers was shot dead while others escaped with gunshot injuries."

Meanwhile, the Commissioner of Police in Ogun State, CP Ahmed Iliyasu has commended his men for the prompt response to the distress call.

The CP appealed to members of the public, especially the hospitals to quickly informed the police if they see anybody with gunshot wound in their areas.