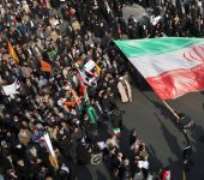 Iran recently  erupted in country-wide protests  that brought out both anti- and pro-government forces.

The demonstrators in Iran mobilized against everything from the government to the economic woes of the country. Gradually, across the country, anti-government protestors turned to the same target: a wealthy elite that has reaped the benefits of a top-down theocratic regime.

At least a part of this seems to have been spurred by a new openness from Iranian millennials, who hardly keep their wealth a secret, especially in the age of social media.

“When the occasional Maserati roars through the crowded streets of Tehran, past crowded buses and shabby domestic sedans, pedestrians sometimes unleash streams of curses in its wake,” Shashank Bengali and Ramin Mostaghim write in the Los Angeles Times. The LA Times used the popular “ Rich Kids of Tehran ” Instagram account as an example, where “attractive 20-somethings flaunt $1,000 Hermes sandals and frolic poolside at lavish mansions in a capital where, perhaps in another part of town, the desperate  hawk their own kidneys  to feed their families.”

As Iranian journalist Amir Ahmadi Arian  puts it  in an op-ed for the New York Times, “Wealthy young Iranians act like a new aristocratic class unaware of the sources of their wealth.”

“They brazenly drive Porsches and Maseratis through the streets of Tehran before the eyes of the poor and post about their wealth on Instagram,” Arian writes.

The inequalities majority of the protestors face has been building up for the past decade, and seemed to finally reached a breaking point, especially after President Hassan Rouhani introduced  an austerity budget.

While the working class protesters have shouted “Death to Rouhani” and “Death to the dictator,” the Rich Kids of Tehran Twitter account has been very  supportive  of Rouhani and the Iranian government in the past.