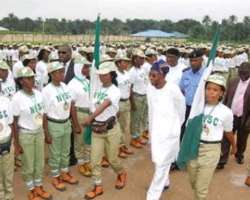 Osun State Government has commenced arrangement for the payment of the outstanding allowances of the past and resent members of the National Youth Service Corps (NYSC) who served or currently serving in the state.

The state was unable to pay the allowance to the corps members for some time due to economic situation which forced the state government to be paying modulated salaries to senior civil servants in the state.

At the state executive council meeting on Wednesday, January 3rd, 2018, the council examined the report on outstanding allowance of the Corps members, past and present, posted to Osun, and directed that the processes and modalities for offsetting the arrears be started immediately.

The council commended the state governor, Mr Rauf Aregbesola for the matured and pragmatic manner he handled the industrial action embarked upon by labour unions in the state recently, particularly for granting their demands satisfactorily and limiting work boycott by workers to four days.

The Council also received report that some professional groups in the state have not been cooperating with the state’s tax administrators. Council condemned this and urged them to begin to cooperate with the tax agencies and obey the state’s tax laws forthwith.

The Media Adviser to the Governor, Sola Fasure told The Nigerian Voice that the state government has therefore directed the tax collecting agencies to use all means necessary to obtain the cooperation of the tax payers and enforce all relevant laws on taxation.

"All organisations and individuals doing business in Osun should realise that taxation is the basis of government sustenance and the State Government of Osun is fully determined to collect its revenue to the last kobo and bring the full weight of the law to bear on any defaulter", Fasure stated.