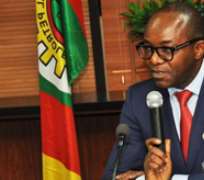 The Federal Government may increase the price of Premium Motor Spirit (PMS), popularly called petrol to a minimum price of N180 and above anytime soon.

Minister of State for Petroleum Resources, Dr. Ibe Kachikwu who dropped the hint in Abuja on Thursday, said the current price of N145 per litre can no longer be sustained.

In a presentation he made to a joint committee on Petroleum (Downstream) of the Senate and the House of Representatives, the Minister said the landing cost for petrol stood at N171 per litre.

According to him, the Federal Government, through the Nigerian National Petroleum Corporation (NNPC) has been bearing the cost of N26 per litre, representing the difference between N171 and the current official price of N145 per litre.

“We now have to go back and find the solution to this problem in order to ease supply gaps and ensure availability of the product at all times,” the Minister said.

Kachikwu, however, proffered three alternative solutions to pump price increase: getting the Central Bank of Nigeria (CBN) to introduce a modulated foreign exchange rate specifically for importers of the product; giving the marketers significant tax adjustments to enable them to absorb the high cost; and a plural pricing system whereby the NNPC would continue to sell at N145 through its numerous outlets while the marketers are allowed to fix their own price.

He stated that the marketers stopped importing fuel since October 2017, as a result of their inability to access foreign exchange from the CBN, leaving only the NNPC to import the product, which has left a wide gap between demand and supply.

Kachikwu lamented that the price of petrol rises with the rise in the price of crude oil in the international, stressing that in such instances, Nigeria spends more to import refined products. In effect, any rise in crude oil price increases the amount the country spends on the importation of fuel.

To address the situation, the Minister canvassed the opening up of production lines, specifically the refineries, which he said, would address supply gaps that usually leads to incessant scarcity.

“Rising prices in international market affecting domestic prices. What the country needs is to have the refineries working. It’s a shame that after 40 years, Nigeria cannot produce its domestic consumption.

“It would take 18 months to address problems of scarcity, price stability and other issues relating to the supply of petroleum products. The pipelines should be concessioned to allow private participation.

“There is huge infrastructure deficit in the system because the NNPC ought to be distributing products through their pipes but most of the pipes are damaged. The has necessitated the use of trucks to distribute the product across the country.

“Most importantly, fixing the refineries should be the lasting solution. To discuss and address the issues, we have to seek approval from the President,” the Minister said.

In his own submission at the hearing, the Group Managing Director of the NNPC, Dr. Maikanti Baru said the last scarcity was caused by rumours of price increase in the media that led marketers into hoarding the product in anticipation of higher prices.

“The NNPC, or the Petroleum Products Pricing and Regulatory Authority (PPPRA) had no mandate to increase pump price,” he said.

The GMD said that the strike action embarked upon by PENGASAN in December was partly responsible for the scarcity, saying issues raised by the association for going on strike had nothing to do with the NNPC.

According to him, the strike triggered panic buying by members of the public leading to scarcity of the product. He added that although PENGASAN called off the strike on December 18, the damage had already been done.

Baru identified other factors responsible for the last scarcity to be the higher price at which petrol is sold in neighbouring African countries, citing Cameroun where he said petrol sells for N300-N400 per litre.

Stating that the NNPC has enough products to bridge supply gaps, Baru insisted the corporation has sufficient stock to go round even without importation.

The GMD alleged that about 4500 distribution trucks failed to return to depots to complete their distribution formalities during the scarcity period, meaning that the trucks were diverted.

“There was no supply gap because we have Direct Sale Direct Purchase (DSDP) agreement with 10 consortia involved. Three of them rejected their cargoes, which were reallocated to others.”

The GMD also hinted that the refineries in Kaduna and Port Harcourt were being reactivated and restreamed and that they have been producing three million litres daily.

Baru also cited disagreements among the various private operators in the sector as part of the problems that threw up the scarcity, adding that the marketers were busy trading allegations of sharp practices.

He said, “For instance, IPMAN said MOMAN and DAPPMA were charging over N133.28/litre but when we asked them to provide evidence of overcharging, they could not provide any. If proven, NNPC would have withdrawn the licenses of the errant bodies.”

The Executive Secretary of the Department of Petroleum Resources (DPR), Mordecai Baba Ladan told the committee that at the outset of scarcity, the DPR rolled out its machinery across the country, with the directive from the Minister that defaulters be dealt with.

“Almost every marketer/filling station across the country are defaulters. And if all defaulting filing stations were to be shut down, there may not be anyone left.

“They horde, sell above official price and also divert products. But we have stepped up our monitoring process now that the NNPC is the sole importer but the corporation cannot do it alone.

Virtually all the independent marketers that attended the hearing alleged multiple charges by the Nigerian Port Authority (NPA), NIMASA and some state governments charging 3 kobo per litre as landing fee.

The Executive Secretary of MOMAN, Obafemi Olawore said the N800 billion owed marketers by the Federal Government has made it difficult for them to obtain credit from the banks to import the product.

He appealed to the government to give key players major roles in the importation business, saying that shutting down errant filling stations won’t solve the scarcity problem but rather aggravate it.

Olawore called for total deregulation of the sector to allow more participants from the private sector.