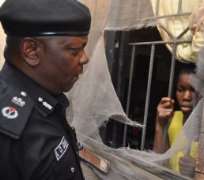 Commissioner of Police, Lagos State Police Command, Imohimi Edgal, Thursday rescued an 11 year-old maid whose guardian locked inside an apartment in Mafoluku area of Lagos , for days, while she traveled to the village.

The victim, Nwafor Precious, a Primary six student, was reportedly brought from her village last October. However, neighbors alleged that she had been going through untold inhuman treatment in the hands of her 'madam'.

The height of the ill treatment according to some residents who spoke to Vanguard, came after she was locked up inside the apartment without access to toilet. A visibly angry Edgal immediately ordered that the padlock on the entrance of the apartment be broken, thereby allowing the pale looking and emaciated maid an air of freedom.

When asked how long she had been locked inside , Precious who was clad in a yellow blouse and a green skirt, said : “ Since my aunty, Chineye Umuze, traveled to Anambra State for Christmas. Her sister usually lock me up until she comes back from work.”

Though she was shocked and frightened at the sight of the security operatives , but the CP assured her that she was in safe hands. Edgal advised that: “Care keepers should treat those placed under their custody in accordance with the constitution.

Lagos State makes adequate provision for the right of the child. It is inhuman, wicked and satanic for anybody to lock up a child in a room that is not ventilated, without putting into consideration that there could be a fire outbreak or any other disaster and she would be trapped.”

He immediately ordered that a new padlock be used to replace the broken one. He also directed the Divisional Police Officer in charge of Mafoluku to prepare a letter of invitation for the victim's guardian.

Thereafter, he handed  Precious to officials of the Child Protection Unit under the Lagos State Ministry of Youths and Social Development, informing that she would first be taken to the hospital to ascertain her present condition of health before being taken to a shelter. He advised neigbours to always report cases of such to the nearest police station for necessary action.