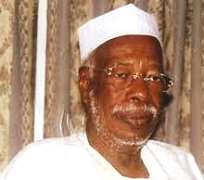 Kaita died at the age of 85, on Tuesday evening after a protracted illness in a hospital, in Abuja.

Alhaji Abubakar Lawal Kaita, a son of the deceased announced the demise of their father.

He said that the funeral rites would take place in Katsina on Wednesday morning.

The deceased left behind a wife and a number of children and grandchildren.

He was elected governor of the defunct Kaduna State under National Party of Nigeria (NPN) in between October and December, 1983.