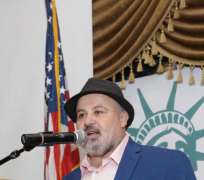 Trump's move is a violation of a policy that was seen as in the best interests of the U.S. and the world, Hamad says.(Photo: Berthold Werner)

I have recently returned from a three-week visit to Beirut, Lebanon. One of the topics that inevitably came up in conversations with friends and family was President Donald Trump's recognition of Jerusalem as Israel's capital and his intention to relocate the American embassy from Tel Aviv to Jerusalem.

The people I spoke with were disappointed and surprised, more than anything else. And they are justified.

Some people say that the Jerusalem Embassy Act of 1995 is a law that recognized Jerusalem as Israel's capital and required the removal of the U.S. embassy from Tel Aviv to Jerusalem. This is inaccurate. Recognition is an executive power and presidents have dealt with that law traditionally as merely advisory. The lawmakers, knowing the sensitivity of the subject, and probably to avoid a clash with the president about the limits of its powers, gave the president the authority to delay implementing this law. And presidents, Republican and Democrats, through the years have exercised their authority to postpone implementation.

United Nations Resolution 181 divided Palestine into an Arab state and a Jewish state. As to Jerusalem, given the special status of the holy city, the U.N. mandated that the city would be a "corpus separatum," an international city not subject to the sovereignty of either state. When hostilities broke out, Israel took over the Western part of the city and Jordan the East

Until the Trump administration made the controversial and provocative move on Jerusalem, no country in the world has its embassy in Jerusalem or recognizes it as the capital of Israel. All countries in the world, except Israel, have condemned Trump's declaration because it violates a long-standing American tradition and U.N. resolutions.

When we speak on Jerusalem, the issue is not that it would make Muslims angry and result in violence. The problem is that Trump's move is a violation of a longstanding American policy that was seen as in the best interests of the U.S. and the world. It was also important for the U.S. to maintain credibility as the main broker of the peace process.

We encourage all peace-loving people to speak up and urge Trump to bring the U.S. back to a position that has worked for us and was consistent with the U.N. resolutions and the policies of America's friends and allies. In urging Trump to reconsider, we join the rest of the world in advocating for a return to a semblance of honest brokering that is consistent with U.N. resolutions and international law.

We cannot give up hope. As an American of Palestinian origin, born a Palestinian refugee in Lebanon, I still hope that people of goodwill prevail and a just and lasting peace is attained, founded on justice and human rights for all.

Imad Hamad is executive director of the American Human Rights Council based in Dearborn.