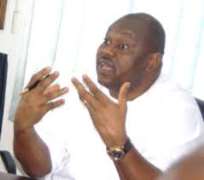 Disappointed by the Ifeanyi Okowa administration in three years, a former gubernatorial aspirant in the 2015 governorship race, Engineer Barr Victor Ochei, has rubbished the government describing it as a misfortune in the history of Delta State.

Speaking in an exclusive interview on how he feels about development in his state under the Peoples’ Democratic (PDP), government, he lamented that since he has been moving across the breath and length of the state, he has not seen what je called star project.

“Well, it is almost three years down the administration. You can see for yourselves as Journalists. What is the development like across the state? I move around the state, am yet to pass my comment but it is abysmal.

“Development! I have seen all those states that are not half as rich as Delta come out with major projects. I have not seen one star project in Delta State. It is abysmal, it is the worst administration so far in terms of development that Deltans have ever seen and I make bold to say it”.

On the January 6 local government elections, he called on the Delta State Independent Electoral Commission (DSIEC) not to waste tax payers monies if the electoral body is to act the script of its pay master.

Hear him: “For me, I would rather tell DSIEC that if they know they want to write results, they shouldn’t waste tax payers money in organizing an election because they are not organizing any election but if Delta State has come of age and the present administration believe they are democrats, let them test their will before the people. Let the votes count and let us see where they stand in the state.

“It will give them a mirror on how they are viewed not the lies they tell themselves. DSIEC is a creation of the law, I don’t want to go into the violation of the law by dissolving them without a reason which doesn’t make sense which clearly underscores the intent of putting in a new DSIEC because you think the old one will not do your bidding and if your bidding is pure that you want to hold a local government election that you will call a world class election that is democratic with Deltans coming to exercise their choice why are you bothered about changing DSIEC?

“But be that as it may you have changed it so let us give it to you. I will only tell DSIEC and their chairman that their integrities are at stake. Whatever they do today, Deltans will hold them in posterity. If they do it right posterity will judge them right. If they do it wrongly, posterity will judge them wrongly and not about themselves but their children and children’s children to come. So, I will advise them even at the pressure of whatever, they should remember that by law they are an independent body and should maintain independence.

“Otherwise, if all the state governors go to write the results what about the federal government also writing its own results? Yes! And write for APC and all the states becomes APC. Will there be anything wrong with that? Because they seems to glory in it. It is wrong and it is high time we rise up as people (citizens) and tell the truth, we don’t care who is involved. If the governor is not doing well, tell him he is not doing well.

“He is a Deltan, we voted him, he is holding our mandate in trust and he messes up with the mandate, we throw him out. Let him know that Deltans wants election and develop grass root democracy by allowing peoples votes to count at the grass root, you don’t come and pay lip service to it and talk so much about it and then go to a meeting in Ughelli and say you want to write the whole results like they write it like Akwa-Ibom did.

“It is a shame; it means they are not on ground that is a clear example of a party that is not on ground. And I want to tell them today, I dare the PDP in Delta State that if they think that they are on ground let them allow a free and fair election let us see. Then they will rightly test and see how they are on the ground in Delta but if they go around writing the results like they want to do, which they are already planning for no matter what they want to try to cover up.

“Put all the bid bill boards that they want to put around just to deceive the people, let them go and let the materials get to the field and let them count the real results and let us see how many seat that PDP will clinch. I dare them!. If PDP claims they are on ground in Delta State, let them have a proper election let us see where they stand. That is to Delta State government.

“Then to DSIEC, if they try to play the master’s tune, well I will not say anything more but my party the APC will take a position and very soon the position will be made public”, he added.