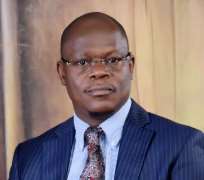 The Attorney General and Commissioner for Justice in Osun State, Dr. Ajibola Basiru has sent his warm New Year felicitation to the people of the state.

This was contained in a statement made available to the Nigerian Voice by the Information officer of the Ministry of Justice in Osogbo, Mr Opeyemi Bello.

Basiru congratulated the people of Osun for witnessing another year and wished them a prosperous new year.

He expressed delight over the support of he people enjoyed by the All Progressive Congress administration led by Ogbeni Rauf Aregbesola in the state. He also commended the Civil Servants in the State for their perseverance.

Dr Basiru charged all the stake holders in the State to continue supporting Aregbesola's administration to deliver more dividends of democracy.

He stressed further that the Aregbesola administration has laid good foundation in the State and provided modern infrastructures to make life better for the citizens.

In addition, he admonishes all the residents in the State to continue praying for the success of the Ogbeni Rauf Aregbesola's Administration.