Arrest Of The Elombahs By F/SARS: When Have Journalists Become Armed Robbers In Nigeria? 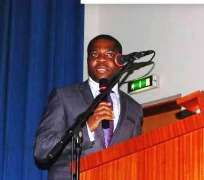 (Intersociety, Onitsha Nigeria: 1st January 2018)-The early and ungodly hour arrest today of Citizens Daniel and Timothy Elombah by the combined team of Federal and Anambra SARS operatives is not only a clear justification of ongoing frustrations expressed by the proponents of “scrap SARS campaign” in Nigeria, but also dangerous crossing of the redlines of intra policing responsibility and duty boundaries. That is to say that journalism practice and exercise of right to freedom of expression have nothing whatsoever in common with anti robbery operations in Nigeria.

Citizens Daniel and Timothy Elombah; direct bothers, were arrested between 5.30am and 6.am in the morning of today by the named SARS operatives who stormed their ancestral house in Nnewi, Anambra State in about two Hilux vans. By the findings of Intersociety from the Elombah family, the callously sinister operation, arrest and humiliation were conducted by SARS operatives from Abuja (F/SARS) and joined by those of Anambra State attached to Awkuzu, Nnewi and Ihiala. While the F/SARS operatives were about three in number, signals were released from Anambra SARS Headquarters at Awkuzu for more operatives to join them in the blue hour sinister operation.

The total number of SARS operatives who participated in the Gestapo operation is not less than ten. The Elombah’s family house including their mother’s bungalow, were cordoned off, surrounded, ransacked and thoroughly searched; after which two laptops and smart phones belonging to the duo and other family members were confiscated. The two brothers were arrested and humiliated before their children, wives and aging mother and later taken away. Their arresters made a brief stopover at the Nnewi SARS Annex, located at the Nnewi North Local Government Area Headquarters; from where another stopover was made at the Awkuzu SARS Headquarters.

It was from there that the two brothers were taken away by their captors and headed towards Enugu by road en-route Abuja most likely by air. Other than saying to the hearing of disguised family member at Awkuzu that “it is a F/SARS operation directed by the IGP himself”, the duo’s captors kept mute and refused to inform the Elombah’s family especially their two wives who were with their husbands when the Gestapo operation commenced; of reasons and persons or authorities behind the arrest and accompanied humiliation. No written note or oral information pertaining to same was given or handed to the family till date.

Citizens Daniel and Timothy Elombah are leading and respected journalists and online publishers in Nigeria; published via Elombah.News.Com. Citizen Daniel is also a holder of LLM and known legal practitioner in the United Kingdom where he lives, while his younger brother-Timothy runs their online publishing outfit in Abuja, Nigeria.

We therefore wonder when journalists and journalism have become armed robbers and offense of armed robbery in Nigeria; warranting the use of personnel of Federal and State Anti Robbery Squads to bundle the two innocent and unarmed Nigerians from their sleep; in a manner reminiscent of operations against dare devil armed robbery suspects in the hideouts.

We further query the rationale behind the arrest and humiliation of innocent Nigerians on a national public holiday or nationally proclaimed hours of the blue law; especially when they are not “fleeing terrorists, armed robbery suspects, coupists or insurrectionists and asportationists or kidnappers”. The Nigerian Union of Journalists is called upon not to allow such tyrannical onslaughts against practicing journalists in the country to be swept under the carpet and rise in strong condemnation of same.

We hereby firmly demand for immediate and unconditional release of Citizens Daniel and Timothy Elombah from the Abuja dudgeon of Nigeria’s Federal Special Anti Robbery Squad (F/SARS). The blunders of the operatives of F/SARS and their presumed instigator/recruiter (IGP) as above highlighted; leading to arrest and humiliation of the duo have expressly rendered whatever intended reasons for their arrest grossly inconsistent and incoherent with the provisions of Nigeria’s 1999 Constitution especially its Fundamental Human Rights provisions.