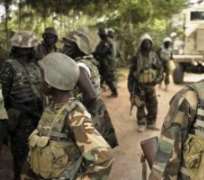 The Theater Commander Operation Lafiya Dole, Major General Rogers I. Nicholas in a statement Monday has announced the immediate review of curfew in Maiduguri and its environs from Tuesday, 2nd January 2018.

The statement said curfew will commence from 8 pm daily to 6 am against the earlier time of 9 pm to 6 am.

The Theater Commander said the decision was informed by the security measures put in place to enhance the safety of lives and property of the citizen's of the state and taken in the best interest of the people and state.

General Nicholas regretted any inconvenience this review may cause the public while appealing to the people and government of Borno to understand and cooperate with the military in providing adequate security to the people.