Buhari frowns at agitators of restructuring, says problems more with process than structure 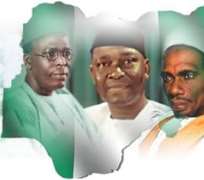 President Muhammadu Buhari has replied agitators for restructuring of the country and said Nigeria's problems have more to do with process than structure.

According to him, he has kept a close watch on the on-going debate about “restructuring”, and opined that no human law or edifice is perfect.

“Whatever structure we develop must periodically be perfected according to changing circumstances and the country's socio-economic developments.

“We Nigerians can be very impatient and want to improve our conditions faster than may be possible considering our resources and capabilities.

“When all the aggregates of nationwide opinions are considered, my firm view is that our problems are more to do with process than structure.

“In older democracies, these systems took centuries to evolve so we cannot expect a copied system to fit neatly our purposes.

“We must give a long period of trial and improvement before the system we have adopted is anywhere near fit for purpose,'' he explained.

The president, however, stressed the need for a closer look at the cost of government and for the public services long used to extravagance, waste and corruption to change for the better.

He assured that his administration would continue to be ever receptive to ideas which would improve governance and contribute to the country's peace and stability.

He emphasized that such dirty politics should be avoided at all costs if Nigerians must live in harmony.

“In this respect, the rest of Nigeria could learn from the South Western States which have successfully internalised religion, ethnicity and politics.

“Political discourse should be conducted with civility, decorum and in a constitutional manner.

“We all have a collective responsibility to strengthen our democracy and entrench the rule of law.

“We should draw encouragement from the series of by-elections conducted by INEC last year which were generally violence free and their outcomes adjudged to be free and fair.''

On security, the president reassured the citizens that security of life and property was still top of his administration's agenda.

He said: “We have since beaten Boko Haram.
“Isolated attacks still occur, but even the best-policed countries cannot prevent determined criminals from committing terrible acts of terror as we have seen during the past years in Europe, Asia, Middle East, elsewhere in Africa and in America.''

According to him, the All Progressives Congress led Federal Government remains determined to protect all Nigerians in line with its election pledge and promises.

The president thanked the nation's Armed forces, the Police, other para-military forces and traditional authorities whom he said were working round the clock to ensure that all citizens engaged in normal business in reasonable safety.

He noted that terrorism and urban crimes were world-wide phenomena and the security forces were continuously adapting their responses to changing threats.

With regard to rampant cases of kidnappings, President Buhari stated that government had taken “immediate short-term measures to combat this new evil creeping into our societies''.

He revealed that tighter police methods and swift and severe punishment for those proved to be engaged in kidnapping would soon be adopted to check the menace.

On Niger Delta, Buhari said government would continue to engage responsible leadership of the communities to help in identifying and addressing genuine grievances of the region.

He daif the Federal Government, in collaboration with the United Nations, had been recording satisfactory progress in the ongoing clean-up programme in Ogoniland and other parts of the Niger Delta.

“I am grateful to all the Governors and other Political & Community leaders of the Niger Delta states for their part in bringing relative peace to the areas,'' he added.

President Buhari used the opportunity to thank all Nigerians who prayed for him during his illness in 2017.

“I feel deeply humbled by your prayers and good wishes and I am more determined than ever to serve you to the best of my ability. And I wish everyone a Happy New Year.(NAN)