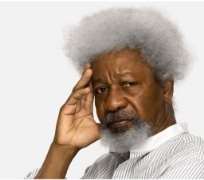 Nobel laureate, Prof. Wole Soyinka, has called on the Federal Government to end the current fuel scarcity in the country rather than buying time and passing blame.

Soyinka stated this on Saturday in a statement titled, “Blame passing: The New Year Gift to a Nation.''

He also cited the clipping of the 1977 edition of the Daily Times when President Muhammadu Buhari, then a minister of petroleum and natural resources, was quoted as saying, “Fuel crisis may be over next year.”

Soyinka said, “I recently ran the gauntlet of petroleum queues through three conveniently situated cities – Lagos, Abeokuta and Ibadan – deliberately, this Friday. Even with 'unorthodox' aids of passage, this was no task for the faint-hearted. Just getting past fueling stations was traumatising, an obstacle race through seething, frustrated masses of humanity, only to find ourselves on vast stretches of emptied roads pleading for occupation. As for obtaining the petroleum in the first place – the less said the better.

“I suspect that this government has permitted itself to be fooled by the peace of those empty streets, but also by the orderly, patient, long-suffering queues that are admittedly prevalent in the city centres. It is time the reporting monitors of government moved to city peripheries and sometimes even some other inner urban sectors, such as Ikeja and Maryland from time to time to see, and listen!

“Pronouncements – such as the 1977 above – again re-echoing by rote in 2017– are a delusion at best, a formula that derides public intelligence. Buying time. Passing blame. Yes, of course, the current affliction must be remedied, and fast, but is there a dimension to it that must be brought to the fore, simultaneously and forcefully? This had better be the framework for solving even a shortage that virtually paralysed the nation.”

According to Soyinka, the 40-year-old 1977 news clipping came into his hands quite fortuitously and it captures the unenviable enigma that is the Nigerian nation.

He added, “It is however a masterful end-of-year image to take into the coming year, not only for the individual now at the helm of government, General Buhari, but for a people surely credited with the most astounding degree of patience and forbearance on the African continent – except of course among themselves, when they turn into predatory fiends.

“When many of us are blissfully departed, an updated rendition of this same clipping – with a change of cast here and there – will undoubtedly be reproduced in the media, with the same alibis, the same in-built panacea of blame passing.”

The playwright recalled that before the current fuel crisis, other challenges, requiring an immediate fix, had begun to monopolise national attention, relegating to the sidelines the outcry for a fundamental and holistic approach to the wearisome cycle of citizen trauma.

Noting that there were several other symptoms but not intending to make it be a catalogue of woes, the critic said it was sufficient to draw attention to the Yoruba saying, “Won ni, Amukun, eru e wo. Ounni, at'isaleni. Translation: Some voices alerted the K-Legged porter to the dangerous tilt of the load on his head. His response was – Thank you, but the problem actually resides in the legs.”

According to Soyinka, the providential image above sums up a defining moment for both individual and collective self-assessment and places in question the ability of a nation to profit from past experience.

Soyinka added, “As the tussle for the next round of power gets hotter in the coming year, the electorate will again be manipulated into losing sight of the base issue… Sooner than later, but not as soon as pledged, the fuel crisis will pass. And then, of course, we shall await the next round of shortages, then a recommencement of blame passing.

“What will be the commodity this time – food perhaps? Maybe even potable water? In a nation of plenty, nothing is beyond eventual shortage – except, of course, the commonplace endowment of pre-emptive planning and methodical execution.”