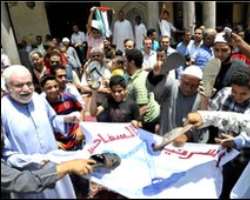 A court in Cairo has upheld a ruling urging the government to consider stripping Egyptian men who are married to Israeli women of their citizenship.

The ruling requires officials to send all such cases to the cabinet, to be decided on an individual basis.

The interior ministry had appealed againt the original ruling, made by a lower court last year.

The new decision is seen as a sign of negative feeling towards Israel in Egypt, despite a 1979 peace treaty.

Anti-Israeli sentiment is high in the country in the aftermath of Israeli raids on Gaza aid ships – but the long-scheduled court decision was not connected.

It calls on the cabinet to determine whether to remove the nationality of the men concerned, as well as that of their children.

The court said the government should consider whether the Israeli woman was an Arab or a Jew.

It is estimated that about 30,000 Egyptians are married to Israeli women.

'Disloyal'
The lawyer who brought the case, Nabih el-Wahsh, said it was aimed at protecting Egyptian youth and Egypt's national security.

He says that offspring of marriages between Egyptian men and Israeli women should not be allowed to perform military service.

There should not be a new generation “disloyal to Egypt and the Arab world”, he said.

The appeal was sent by the government after a verdict last year stated the 1976 article of citizenship law should be implemented.

That law requires the stripping of citizenship of those who married Israelis who have served in the army or embraced Zionism.

Negad al-Borai, an Egyptian lawyer and a human rights activist, said he was “surprised” by the verdict and that the government was sending out mixed messages about Israel.

“The president congratulates Israel's president in national holidays yet it punishes the people for having relationships with Israel,” he told Reuters news agency.

“Egyptian law says citizenship can only be revoked if the citizen is proven to be spying on his country, and this verdict considers marrying an Israeli an act of spying”.