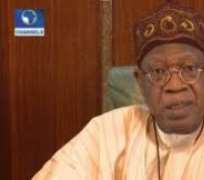 The Federal Government has come out strongly to defend the decision of the Nigeria Economic Council to approve $1billion fund from the Excess Crude Account for the fight against insurgency in the North East.

For the government,  the criticisms trailing the approval of $1billion for the fight against insurgency and other violent crimes in the country is unnecessary and unhelpful.

The Minister of Information, Culture and and Tourism, Alhaji Lai Mohammed,  at a news conference in Lagos said the Nigerian Governor's Forum (NGF) acted wisely in approving the fund from the ECA based on the need to properly fund security operations in the country to adequately respond to threats by Boko Haram and other criminals.

He said that the approved fund was not to fight Boko Haram in the North East alone but also to tackle kidnapping, cattle rustling, illegal oil bunkering and other crimes expressing.

The minister expressed dismay that an action intended to make the country safer had been subjected to attacks by people with ulterior motives.

He said that it was wrong to sacrifice the issue of security on the altar of politics, saying opponents of the fund were taking politics too far.Further justifying the approval, the Mohammed said military operations in the North East cost the country a lot of money.

According to Mohammed,  the aircraft being used for the war, including fighter jets and helicopters, altogether consumed 64,021.08 litres of fuel per day amounting to N15.153million daily to fuel the aircraft adding that spares for the aircraft from January to November 2017 cost a total of N20,019 million while consumables for the aircraft,and here I am talking of engine oil, plugs etc, amounted toN 3.86million

monthly
“There has been an unnecessary, uninformed and highly-partisan criticism of the one billion dollars which was recently approved by the Nigeria Governors Forum (NGF) for the military to tackle the security challenges facing the country, including Boko Haram, illegal oil bunkering, kidnapping and cattle

rustling,” he stated.
“I said unnecessary and uninformed because everyone knows the role

the military is playing in helping to tackle the numerous security

crisis facing the states, much less the war against Boko Haram.

war is over. As we have said times without number, asymmetric wars

like the one against Boko Haram do not end with an armistice.

“It is, therefore, curious that some of those who have criticised the

the Boko Haram has been degraded.
“Perhaps also, the critics do not know that fighting an asymmetric war is costlier than fighting a conventional war. In any case, wars, especially the war against terror, are never fought with budgetary provisions.

“It is common knowledge that the annual budgetary allocation to

the military is not commensurate with the internal security challenges

we face, for which we have had to continuously rely on the military to

bunkerers and pipeline vandals are seeking to overwhelm our oil

of scarce resources. We come up with spurious reasons to deny the military its due.

“The Nigeria Governors Forum acted wisely in approving the withdrawal of one billion dollars from the Excess Crude Account (ECA) to fight Boko Haram and other security challenges in the country.

“The one billion dollars is not too much to fight our security challenges….”