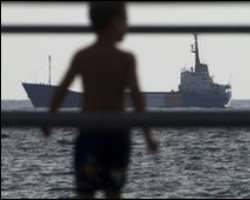 A group of activists detained for trying to sail an aid ship to Gaza in defiance of Israel's blockade will be deported soon, Israeli officials say.

The 11 campaigners and eight crew have signed deportation papers and will leave on Sunday, a day after troops boarded their ship the Rachel Corrie.

On Monday, Israeli forces killed nine activists in clashes as they tried to break the blockade.

Post-mortems in Turkey suggest one activist had four bullets in the head.

The examinations were carried out in Turkey because eight of those killed were Turkish, and the ninth had joint US-Turkish nationality.

The post-mortems said a total of 30 bullets had been found in their bodies, according to the state forensic department.

The BBC's Jonathan Head, in Istanbul, says some of the details seem to contradict the Israeli assertion that their commandos used minimum lethal force during the violent confrontation with those on board the Turkish Mavi Marmara.

Israel has faced an international outcry over the incident, which has also soured relations with Turkey.

It would include representatives from the US, Turkey and Israel, and could be headed by former New Zealand Prime Minister Geoffrey Palmer.

The Israeli cabinet is said to be considering the project.

Activists defiant
Mr Netanyahu has hailed the peaceful outcome of the latest operation.

He described those on board the Irish-owned Rachel Corrie as “peace activists”, but labelled the other vessel – the Mavi Marmara – a “ship of hate organised by violent Turkish terror extremists”.

The Cyprus-based Free Gaza Movement, which organised the attempts to break Israel's blockade, vowed that further aid shipments would be sent.

There were six Malaysian and five Irish campaigners aboard the MV Rachel Corrie, which was named after a US college student who was crushed to death by an Israeli army bulldozer in Gaza in 2003.

Israeli interior ministry spokeswoman Sabine Haddad said most of the crew and campaigners would be flown out on Sunday; the rest would leave the country over land to Jordan.

The 1,200-tonne cargo ship was boarded about 16 nautical miles (30km) off the Israeli coast.

The ship was carrying hundreds of tonnes of aid, including wheelchairs, medical supplies and cement.

Israel says it will check the shipment and transfer all of the aid it deems acceptable into the Gaza Strip.

Foreign ministry spokesman Mark Regev told the BBC Israel had had an agreement with the Irish Republic for the vessel to go to the Israeli port of Ashdod to be checked – and from there the aid and the activists on board could have proceeded to Gaza.

Israel stepped up its blockade of Gaza in 2007, when the Islamist Hamas movement took control of the territory, and says its policies will not change while Hamas remains in power.

Defending the Israeli blockade, Mr Regev said there was no humanitarian crisis in Gaza – and accused Hamas of blocking the supply of aid into the territory.

Hamas has so far refused to accept the aid from the Mavi Marmara until all the activists from the ship detained by Israel are released.