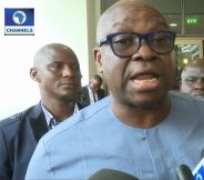 The Ekiti State Governor, Mr Ayodele Fayose, has directed that 80 per cent of the petrol in the Government Fuel Dump is released to two petrol stations in Ado Ekiti.

litre.
The governor, who made this known via his Twitter handle on Sunday said: “The maximum a single individual can buy will be 25 litres.”

“I cannot be keeping fuel in the govt house dump while our people keep suffering.

“I have asked them to pump out 80% of the petrol in the Govt House Fuel Dump to be sold at the control price of N145.

“I am going to town to locate the two petrol stations where the petrol will be sold,” he added.

Governor Fayose who has continuously complained of the government's “nonchalant attitude towards ending the fuel scarcity being experienced across the country”, said “the APC led Federal Government has turned the joy of Nigerians to groaning.

“The APC led federal government has turned the joy of Nigerians to groaning. People cannot travel to meet their families because of the wickedness of this APC government.

“This hardship is too much for Nigerians to bear at this time and it is obvious that President Muhammadu Buhari does not have a solution to the fuel scarcity.”

To reduce the hardship being faced by our people because of scarcity of fuel, I have directed that 80% of the petrol in the 60,000 litres capacity Govt House Fuel Dump be taken to a Petrol station in Ado Ekiti to be announced soon.

This comes shortly after the General Managing Director of the Nigerian National Petroleum Corporation (NNPC), Maikanti Baru, on Sunday assured Nigerians that there will be a robust supply of products throughout this festive period.  Read Here.