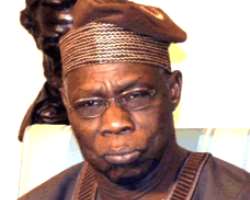 With the ugly picture above, the Acting Chairman of the Independent National Electoral Commission (INEC), Solomon Soyebi hinted on what to expect in the next general election.

Though in acting capacity, the current INEC boss who was speaking before the Ad-doc Committee on Constitution Review and Electoral Act was just short of saying that the 2011 election would be a flop.

But analysts argue that Soyebi was merely telling critical Nigerians what they already knew. The calculation is that except a miracle happens, the forthcoming poll would be like the ones held in the past.

Many believe that since 1999 that democracy was re-introduced in Nigeria, the nation's electoral process has not witnessed any remarkable progress. For observers of political developments, the 1999 election that led to the emergence of the former President, Olusegun Obasanjo was relatively free and fair when juxtaposed with others after it.

Following that trend, ahead of 2011 general elections, many are worried that the signs of the flaws that have become the lot of the electoral process are rearing their ugly heads again. Already, the question on the lips of many is-Can President Goodluck Jonathan have the political will to conduct a free, fair and credible election? The answer is neither here nor there but there are issues that must be put in perspective.

Jonathan's ambition
In this clime and generally in Africa, it is almost a convention that when an incumbent office holder is seeking re-election, he is almost certain to get it. There is no gainsaying that the incumbency factor has remained a critical issue in Nigeria's successive elections. Analysts argue that the North has been hammering on the issue of zoning to stop President Jonathan from running because of the influence he enjoys and power he wields as a sitting president. The calculation is that as an incumbent, he is already shoulder above other opponents irrespective of their geo-political zones or party platforms.

Many have argued that Jonathan should forget his ambition but limit himself to conducting a free, fair and transparent election that will be acceptable to all Nigeria. But there are those who insist that as a Nigerian, he has the constitutional rights to contest.

To stretch the argument further, people in this school of thought believe that nobody in President Jonathan's shoes would be able to resist the temptation of seeking re-election.

Electoral Reform
President Jonathan has outwardly shown determination to reform the country's electoral system for Nigeria to have a credible ballot next year. In his Democracy Day speech, he had asserted that 'We must develop a democratic culture in which the will of the people will be treated as sacred and be immune to subversion by anti-democratic elements'.

The fear is that with his interest for re-election and based on the nation's political culture, it will be difficult, if not impossible for him to meet the expectations of Nigerians in terms of conducting credible elections. As the 2011 date draws nearer by the day, many are anxiously waiting to see how far he can implement the Justice Muhammed Uwais Electoral Reform Committee.

In the estimation of majority of Nigerians, the future of the nation's electoral process depends on the implementation of the report. In carrying out its assignment, the committee consulted widely with individuals, institutions, state and local governments and received 1,466 memoranda even as public hearings were held in 12 selected states and the Federal Capital Territory (FCT).

According to the committee, at least 907 representations were made in the report.

Before the death of late President Umaru Yar'Adua, he had promised that the government would do everything within its powers to ensure that the recommendation was fully implemented with a view to guaranteeing credible electoral processes in the country.

'Our focus on the electoral reform is predicated on the belief that elections are the very heart of democracy, hence they must not only be fair but they must also be seen to be so by our people and the rest of the world. 'It is our abiding belief that failure in instituting an acceptable process by which the representatives of the people are chosen will definitely resort in failure in the long run.

For us to succeed in our effort however, we need the buy-in of all stakeholders, politicians, the media, civil society and indeed all Nigerians. 'Nurturing and sustaining credible electoral regime indeed entail the cooperation and magnanimous winner who can appreciate the burden of responsibility and gallant losers who will gracefully accept defeat in the certainty is the process if the process is just ensured', he had said.

Attitude of politicians
For Nigeria to have a credible election in 2011, many believe that politicians must change their Machievalian attitude of the end justifies the means. The election must not according to the former President, Olusegun Obasanjo, be a do-or die-affair. It must not be a game of winner takes all as the practice in the past.

In the estimation of many, the desperation of politicians to win at all cost makes them to compromise the electoral process. So, for the election to be free and fair, the politicians who are the main actors in the political chessboard must be ready to live according to the rules of the game.

The electoral umpire
Nigerians are hoping that President Jonathan would appoint a man with a pedigree and lion heart to superintend the Independent National Electoral Commission (INEC).

To do this, observers argue that the nation's collective interest and not that of the ruling party should be the basis for appointing the electoral umpire.