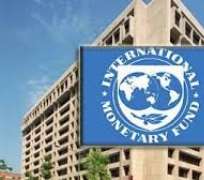 Hold your breath, the International Monetary Fund appears to say to the Nigerian government as the Bretton woods institution thinks that Nigeria ought not celebrate over the economy yet.

IMF said on Friday  that in spite of Nigeria's exit from recession, the economy of the country is still vulnerable.

The IMF said its staff team led by Amine Mati, Senior Resident Representative and Mission Chief for Nigeria, visited Nigeria from Dec. 6 to Dec. 20, 2017 to conduct the 2018 Article IV consultation.

In statement by Raphael Ranspach, its Media and Press Officer, the global development body welcomed the Federal Government's actions to improve the power sector and business environment under the Economic Recovery and Growth Plan (EGRP).

But on the macroeconomic frontier, the  Fund believes that structural reforms remained urgent to contain vulnerability and support sustainable private sector-led growth.

According to the report which was the result of their visit, “Overall growth is slowly picking up but recovery remains challenging. Economic activity expanded by 1.4 per cent year-on-year in the third quarter of 2017 – the second consecutive quarter of positive growth after five quarters of recession — driven by recovering oil production and agriculture.

“However, growth in the non-oil-non-agricultural sector (representing about 65 per cent of the economy) contracted in the first three quarters of 2017 relative to the same period last year. “Difficulties in accessing financing and high inflation continued to weigh on companies' performance and consumer demand.

“Headline inflation declined to 15.9 per cent by end-November, from 18.5 per cent at end of 2016, but remains sticky despite tight liquidity conditions. “High fiscal deficits – driven by weak revenue mobilisation – generated large financing needs, which, when combined with tight monetary policy necessary to reduce inflationary pressures, increased pressure on bond yields and crowded out private sector credit.”

The fund said the factors enumerated above contributed to raising the ratio of interest payments to the Federal Government revenue to unsustainable levels. Reflecting the low growth environment and exposure to the oil and gas sector, the banking industry's solvency ratio have declined from almost 15 to 10.5 per cent between December 2016 and October 2017.

“In addition, non-performing loans have increased from 5 per cent in June 2015 to 15 per cent as of October 2017, although with provisioning coverage of about 82 per cent,” it said. IMF, however, said the authorities had begun addressing macroeconomic imbalances and structural impediments through the implementation of policies underpinning the ERGP. It said recovering oil prices, the new Investor and Exporter foreign exchange window has increased investor confidence and provided impetus to portfolio inflows. The fund added that these have helped to increase external buffers to a four-year high and contributed to reducing the parallel market premium. It said important actions under the Power Sector Recovery Programme increased power supply generation and ensured government agencies paid their electricity bills. It added that welcome steps were also taken to improve the business environment and to address longstanding corruption issues, including through the adoption of the National Anti-Corruption Strategy in August 2017.

The IMF said that with these positive actions, growth is expected to continue to pick up in 2018 to 2.1 per cent, helped by the full year impact of greater availability of foreign exchange and higher oil production, but to stay relatively flat in the medium term. “However, in the absence of new policies, the near-term outlook remains challenging. Risks to the outlook include lower oil prices, tighter external market conditions, heightened security issues and delayed policy responses,” it said. It called for measures to contain vulnerabilities and achieve growth rates that could make a significant impact in reducing poverty and unemployment, which required a comprehensive set of policy measures.

On the fiscal front, the Fund welcomed the recent tax reforms aimed at improving tax administration, planned increases in excises, and latest steps taken to lower debt servicing costs and lengthen maturities. “However, with oil prices expected to remain lower than in the past, upfront actions to mobilise non-oil revenues, including through reforming the VAT and removing exemptions, are needed while safeguarding priority expenditures, including scaling up social safety nets and infrastructure investment.

“Fiscal consolidation should be accompanied by a monetary policy stance that remains tight to further reduce inflation and anchor inflation expectations. “Moving toward a unified and market-based exchange rate as soon as possible while continuing to strengthen external buffers would be necessary to increase confidence and reduce potential risks from capital flow reversals. “Such a policy package – along with structural reform implementation, including by building on recent successes to improve the business environment, closing infrastructure gaps, and implementing the power sector reform plan – would lay the foundation for a diversified private-sector led economy. “Strengthening governance and transparency initiatives, and lowering gender inequality and fostering financial inclusion would also be important,” the Fund said.