Another PDP lawmaker defects to APC 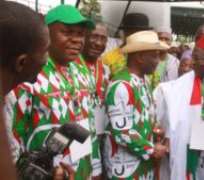 The Peoples Democratic Party has lost another member to the ruling   All Progressives Congress in the House of Representatives.

Barely 36 hours after a member of the PDP from Imo State, Mr. Raphael Igbokwe, had defected to the APC,  Mr. Johnson Agbonayinma from Edo State also moved camp to the ruling party.

Agbonayinma, was a member of the Ali Modu Sheriff faction before the Supreme Court recognised the then Senator Ahmed Makarfi faction as the authentic leadership of the party.

Agbonayinma  anchored his defection on a claim that  “the PDP has shut the door against me.”

Shuaibu was a member of the House