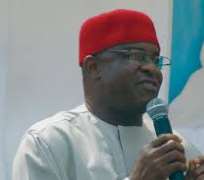 Immediate past Senate President, David Mark, has described the allegation by the Economic and Financial Crimes Commission that he purchased his house in Apo Legislative Quarters Abuja illegally as “spurious, contrived and baseless.”

Mark, in a statement on Tuesday by his Media Assistant, Mr. Paul Mumeh, said the EFCC or any other agent of government were chasing shadows as the property was duly offered for sale, bided for and he purchased it in line with the Federal Government's monetisation policy, which was started by the administration of ex-President Olusegun Obasanjo.

He said, “I had the right of first refusal. Even if I did not purchase it, someone else would have. I am a law-abiding citizen. I did not flout any law. Curiously, four houses occupied by the then presiding officers of the National Assembly were offered to the occupants.

“ All of us – I, as the then President of the Senate; the Deputy Senate President , Ike Ekweremadu; the then Speaker of the House of Representatives, Dimeji Bankole; and his deputy, Bayero Nafada – were given the same offer. I am at a loss as to why it is now a subject of contention.

“If this persecution is about politics, my political party and the 2019 elections, I dare say that only God and Nigerians would decide. No amount of persecution would alter the will of God.

“I had refrained from commenting on this because it is already in court. But they have taken the matter to the court of public opinion.”

The Federal Government had accused Mark of illegally acquiring his then official residence as his private property.

In September this year, the government, through the Special Presidential Investigation Panel for the Recovery of Public Property, which is chaired by Chief Okoi Obono-Obla, gave the former Senate President a 21-day notice to quit the mansion.

The notice to quit, however, asked Mark to “show cause” why the Federal Government should not “enforce the recovery of the property for public good.”

But Mark had filed a suit before the Federal High Court in Abuja to quash all steps taken by the panel to evict him and recover the house from him.

The case has not been heard.
Credit: PUNCH