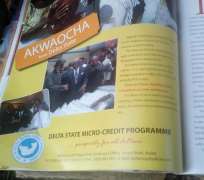 Fact available to The Nigerian Voice has it that the “Prosperity for all Deltans”, slogan paraded by the present administration of Ifeanyi Arthur Okowa, Delta State governor, is solely the idea of Dr Antonia Ashiedu, the Executive Assistant to the immediate past governor of the state, Dr Emmanuel Eweta Uduaghan, on Micro Credit under the then Delta State Micro Credit Programme (DMCP).

The slogan went wide during Uduaghan’s regime as it was not just a sentence, a clause or a phrase on the lips of government functionaries but could be likened to a synonym of wealth as a result of the impact the programme created in the lives of both urban and rural dwellers across the three senatorial districts of the state as it addressed the issue of poverty two years after DMCP was implemented.

The DMCP was actually launched on the 14th day of December, 2007 and at the end of its second year of operation, the programme recorded 4, 708 groups comprising of 51, 186 persons, made up of 32, 410 women and 18, 776 men. This caused the slogan to move faster than expected across the 25 local government councils.

On assumption of office on 29 May 2015, Okowa scrapped the DMCP and replaced it with the Delta State Small, Micro and Medium Enterprises Development Agency (DEMSMA), with the appointment of Mrs. Shimite Bello, the slogan which was limited a to an agency but impactful became a state affair under Okowa, yet, with no or less impact.

Although, the incumbent governor is seemed to be “experienced” as he claimed in his maiden press briefing during his first year anniversary, when he boasted “One thing people cannot take away from me is that I have gotten a lot of experience”.

Our correspondent is currently with the Special Edition of DMCP Bi-Annual Journal / Vol. 2/ No. 1 with the title: “Delta’s Industrial Seed SPROUTS”, with other sub-headings “World Bank Impressed With DMCP”, “Spectacles of Grassroot Resolution and 51, 186 people empowered”, with the picture of the immediate past governor, Uduaghan, holding up a park of “Akanon Plantain Floor”.

A glance through the journal, our correspondent uncovered an article on page 134 titled: “Sparkles in Ghana”, written by the former media aide to Dr Ashiedu and present media assistant to Okowa on electronics, Amaechi Udemba.

The write-up is a pointer that the “slogan” was allegedly plagiarized perhaps during a session of brainstorming to get some suitable ideas that could be put together which may have formed part of programmes and policies of the Okowa’s SMART Agenda today.

It is worthy of note that plagiarism is the “wrongful appropriation” and “stealing and publication” of another author's “language, thoughts, ideas, or expressions” and the representation of them as one's own original work.

Contacted through a text message, the Chief Press Secretary (CPS) to the governor, Charles Ehiedu Aniagwu, instead of responding to the allegation, sought to know from our correspondent who made the allegation.

In a telephone conversation, he insisted that he would not react to the allegation unless the source was disclosed.

Hear him: “You see why I don’t answer some of you; it is because you don’t do things professionally. Who am I responding to? I will like to know so that I can respond properly. If it is a medium, I will also like to know. You cannot just tell me that someone alleged that the governor did something because allegation is accusation and you want me to react without knowing the person. It is not done, if you are a professional you will know that is the right thing to do. Unless you are the one alleging”, he insisted.